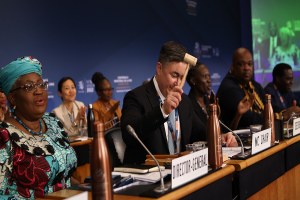 India leads and delivers at the MC12: Piyush Goyal

The “Geneva Package” today confirms the historical importance of the multilateral trading system and underlines the important role of the WTO in addressing the world’s most pressing issues, especially at a time when global solutions are critical.

Earlier, the MC12 was extended by one day, until Thursday, June 16, in order to facilitate outcomes on the main issues under discussion.

Round-the-clock negotiations among delegations produced the “Geneva Package”, which contains a series of unprecedented decisions on fisheries subsidies, WTO response to emergencies, including a waiver of certain requirements concerning compulsory licensing for COVID-19 vaccines, food safety and agriculture, and WTO reform.

India’s Union Minister of Commerce & Industry, Consumer Affairs and Food & Public Distribution and Textiles,  Piyush Goyal, said after the conclusion of the MC12 that India has been able to secure a favourable outcome at the WTO after many years, despite a strong global campaign against our farmers & fishermen.

Terming the just concluded MC12 as an “outcome-oriented” success, Goyal said the Indian delegation was ‘100 per cent’ successful in portraying before the world the priority issues for India and the developing world.

He claimed the Indian delegation leveraged India’s strong relationship with the world, and told a press conference here today: “Few countries attempted to create a false campaign, initially on Sunday and Monday, that India is obstinate due to which no progress is being made. The real situation has emerged before us all, the issues raised by India, on which Prime Minister had asked us to focus upon, now the whole world acknowledges that was the correct agenda and ultimately India played a vital role in arriving at all solutions.”

Stating that it is a proud day for 135 crore Indians at the WTO today, Goyal said India took the lead and was at the centre of the conference. “It turned the tide of negotiations from full failure, gloom & doom to optimism, enthusiasm and consensus-based decision. India’s efforts to bring members to a table to discuss issues irrespective of the existing geopolitical order has ensured that the world order is not broken,” he said.

“The package of agreements you have reached will make a difference to the lives of people around the world. The outcomes demonstrate that the WTO is, in fact, capable of responding to the emergencies of our time,” said WTO Director-General Ngozi Okonjo-Iweala. “They show the world that WTO members can come together, across geopolitical fault lines, to address problems of the global commons, and to reinforce and reinvigorate this institution. They give us cause to hope that strategic competition will be able to exist alongside growing strategic cooperation.”

The United Nations Conference on Trade and Development (UNCTAD) congratulated WTO member states for delivering the Ministerial Declaration at the conclusion of the 12^th Ministerial Conference.

“This declaration includes a breadth of decisions that are imperative for the multilateral trading system to remain fit for purpose in good times as well as in crises. We appreciate the outcome is forward-looking and ensures WTO members continue constructive efforts to make WTO fairer and more inclusive for developing countries and for economies vulnerable in times of crisis,” UNCTAD said in a statement today.

Ministers from the WTO’s 164 members formally adopted decisions on the following at the conclusion of their 12th Ministerial Conference:

In addition, ministers adopted two decisions – on the Work Programme on Small Economies and on the TRIPS non-violation and situation complaints , and a Sanitary and Phytosanitary Declarationhttps://globalbihari.com/wp-content/uploads/2022/06/Sanitary-and-Phytosanitary-Declaration.pdf for the Twelfth WTO Ministerial Conference: Responding to Modern SPS Challenges.

Acknowledging the “vital importance of agriculture,” DG Okonjo-Iweala noted that differences on some issues, including public stockholding for food security purposes, domestic support, cotton and market access “meant that we could not achieve consensus on a new roadmap for future work.” However, she added, “members found a renewed sense of purpose: they are determined to keep at it on the basis of existing mandates, with a view to reaching positive outcomes at MC13.”

India’s Ministry of Commerce and Industry, meanwhile, made the following explanation on the outcomes at the WTO MC12 meeting: