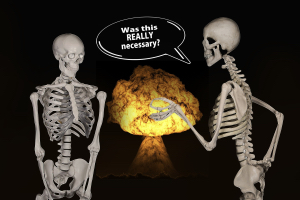 There is a serious threat of nuclear explosions once again in the world. Russia has raised the anxiety of the world in the midst of the war with Ukraine by stating that it can also use nuclear weapons. The US is threatening retaliatory action. Pope is begging for peace. The matter has reached the United Nations.

In such a situation, it is important to know about atomic bombs. What are they? What is the science behind them? Why is there a danger of the end of the world due to their use?

We all know nuclear weapons are weapons of mass destruction that use nuclear energy to cause destruction. There are nine countries in the world that have about 12,700 nuclear weapons, though much lesser numbers are enough to destroy the world. As a matter of fact, so far atomic bombs have been used only twice – In 1945, on August 6 and 9, the United States consecutively dropped bombs on Hiroshima and Nagasaki in Japan. These bombs, named Little Boy and Fat Man, were so powerful that Japan was destroyed. Japan had to lay down arms and the Second World War ended.

What is the science behind nuclear weapons?

For a complete understanding, it is necessary to understand the structure atom first. We all know that everything in the world is made of molecules. And the molecule is made of atoms. There are three important particles in an atom – electron, proton and neutron. Among these, protons and neutrons are bound together at the centre of the atom- called the nucleus. The electrons revolve around this nucleus.

Atoms have huge hidden energy. This energy can be extracted in two ways. (E=mc2). So how to harness this energy from atoms?

1. The first way is by breaking the nucleus of the atom.

2. Another way is by forcibly combining together the nuclei of two atoms.

Both methods release a huge amount of energy.

Hydrogen bombs are about a thousand times more lethal than atomic bombs and have the potential to destroy the whole world. The world’s first hydrogen bomb was tested by the US on November 01, 1952, on a small island called Eniwetok located on the Marshall Islands. Its explosion released several thousand megatons of TNT energy. Its explosion emitted light brighter than the sunlight and the heatwave from it was felt up to 50 kilometres away.

Heavy matter such as uranium and plutonium are used for fission because the heavy materials are unstable and can easily break and unite. Hydrogen 2 {Duetrium} and Hydrogen 3 {Tritium} are used for fusion converting them into Helium.

When was the first atomic bomb made, and when was it used?

After the explosion of the first nuclear test, Oppenheimer said that the thoughts of the Bhagavad Gita came to his mind – “Now I have become death, the destroyer of the world”.

The atomic bomb dropped on Hiroshima

For the first time in the world, the atomic bomb was used by the United States on the Japanese city of Hiroshima on August 06, 1945. The atomic bomb dropped on Hiroshima was nicknamed ‘Little Boy‘ because of its long and slender shape. 64 kg of Uranium 235 was used in this bomb, causing an explosion which was equivalent to an explosion of 15,000 tons of TNT. The atomic bomb dropped on Hiroshima killed 70,000 people immediately, while radiation injuries caused at least 76,000 more deaths within a few months.

The atomic bomb dropped on Nagasaki

Atomic bombs can put millions of people to death

Nuclear weapons are the most dangerous weapons on earth. These weapons can destroy entire cities, and kill millions of people. Their impact on the environment and future generations lasts for long. This threatens the very existence of life on earth.

After an atomic bomb explosion

◆The temperature of the area around it reaches several million degrees centigrades.
◆The heat generated over a large area due to the explosion of an atomic bomb makes all the human tissue evaporate.
◆People who take refuge in a building are killed by the shock wave and heat generated by the explosion, as the buildings collapse and the inflammable materials catch fire.
◆People who take shelter in underground places may survive the fire, but may die of suffocation due to exhaustion of oxygen from the atmosphere.
◆So after the detonation of an atomic bomb, it may be almost impossible for anyone to escape wherever a person hides.
◆Even those who survive the atomic blast may get blinded by the flash of the light or may suffer radiation burns, and have fatal internal organ injuries.
◆The radiation emitted from the explosion increases the risk of cancer.
◆People may be born with congenital malformations even 20 years later in the areas affected by the blast and radiation.
◆Even the trees and plants in the area get radiation burns, and can’t grow adequately affecting the yield of crops and leading to famines. The Red Cross estimates that one billion of the world’s population could be affected by starvation if a nuclear war broke out.
◆Nuclear bombs have a worst effect on the climate and the environment than any other weapon.

The atomic bombs dropped on Hiroshima and Nagasaki can be termed tiny toys in the face of modern nuclear weapons. Presently, Russia and USA have nuclear weapons capable of destroying the whole world number of times. For example, the most powerful nuclear weapon the US has is the B83 hydrogen bomb, which can detonate equivalent to 1.2 megatons of TNT and is nearly 60 times more powerful than the atomic bomb dropped on Nagasaki.

At the same time, the Tsar Bomba made by the Soviet Union is the deadliest nuclear weapon ever. It had a 50-megaton explosion in the test and it was 2500 times more powerful than the bomb dropped on Nagasaki. Russia now has a modern version of this deadly nuclear bomb in the name of RDS-220 Tsar bomb, which has twice the capacity of the old bomb.

I am quite far from the war site so why should I bother?

Remember war does not remain local once a nuclear bomb explodes. Nuclear explosion effects are global.

1 thought on “Understanding the danger of nuclear explosions”