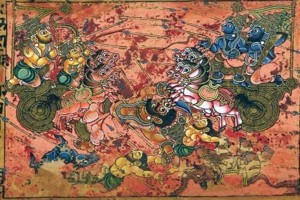 In anxiety and in difficulties, we forget the wisdom of our scriptures, our fables and our morality plays. These are based on years of experience of our ancestors and can pass any test of time. If we do not try to rediscover the wheels and stick to learning from their experiences, the solution to our problems may not be far off.

I was reminded by my Mamaji about a tale from The Mahabharata. The legendary fighter Ashwathama was angry that his father Guru Dronacharya was killed due to deceit. He decided to use Narayan Astra that was capable to destroy anyone who would dare to fight or even think of fighting. Lord Krishna knew the importance of this weapon since he was incarnation of Lord Vishnu (Narayan). He asked the entire army to lay down arms and just pray to God. He asked them not to even think of war or fight. After sometime, the Narayan Astra could do no harm and it lost its efficacy.

In a similar way, when we know that Corona is a pandemic and it affects anyone that comes in its way why we dare to challenge it? Whether it spreads through droplets or air, the only way to protect is to keep ourselves locked. Allow the storm to pass. It would complete its cycle and run its course. Then we can come out and get to our daily routine.

We have added to the plight by not adhering to Corona protocol whether in religious congregations, social gatherings or markets. We had somehow started believing that Indians have developed immunity and nothing would happen. We never imagined that the poor health infrastructure of the country was not equipped to fight if the Pandemic acquires the ferocity it has displayed.

One wrong step, one bad exposure and we are endangering lives of those we love. We hardly know how we acquired the virus. After that it is the saga of prayer and fear, hope and depression. The pains of losing someone dear is too heavy and it brings complete disillusionment.

Therefore, stop blaming anyone. Try to get vaccine. Maintain protocol even when you get vaccine and stay home. Don’t challenge Corona by showing muscles since even the best of bodies have succumbed. Like the army of the Pandavas, duck the storm and pray. This will bring positivity.

*The writer is convener of the Media Relations Department of the BJP and represents the party as a spokesperson on TV debates. The views expressed are personal.

1 thought on “Time to Duck the Storm: Famous tale of Ashwathama and the Pandavas”