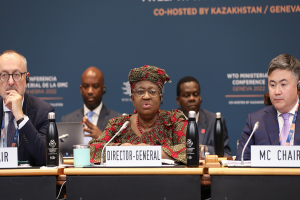 Timur Suleimenov, First Deputy Chief of Staff of the President of Kazakhstan and MC12 Chair reported on the thematic sessions that took place on June 14, 2022 — on fisheries subsidies and agriculture — where, he said, he did not witness the same flexibility and self-restraint expressed by members in the thematic sessions of the previous day on the WTO response to the pandemic, including the intellectual property (IP) response, and on trade and food security. “WTO members’ positions were not as flexible as I would have wished them to be at this point,” he said.

“It requires that we work harder and work nights, whatever it takes to be able to do it. The good news is … that progress is being made but it needs a little more work and more time,” said DG Okonjo-Iweala.

Kamina Johnson Smith, Minister of Foreign Affairs and Foreign Trade of Jamaica and facilitator on WTO reform, said that members made progress but have not managed to bridge the remaining gaps and narrow the differences to reach convergence on the forum for reform. “Today’s conversations have reconfirmed that we all agree on the need to reform and it’s in this context that I urge you all to agree that we commence this crucially important conversation, post MC12,” she said.

Suleimenov said additional meetings will continue in various configurations and reiterated the sense of urgency. “This is crunch time obviously. And regardless of whether we will have an extra day or not, we need to utilize the time remaining to the fullest extent,” he added. He indicated that members know by now what is doable, what needs more time for discussion and what is not possible. “Any attempt to backload the final 22 hours of this conference only increases the chance that all of us will go home empty-handed. And I know that this is contrary to what the world expects from us,” he added. He made an appeal to “start blessing outcomes” to ensure the success of MC12. “With your collective will, we should be able to close those issues. In other areas where there is no agreement, there is a need to intensify efforts to bridge gaps and provide much-needed ministerial guidance.”

Some delegations even suggested that the Conference could go on for an extra day. “They feel that we really can cross the line on some of these things if we gave it a bit more time, so I just throw that out there for your consideration. We can all sleep over it and perhaps we will take the pulse tomorrow to see if that is needed or not,” WTO D-G Okonjo-Iweala said. She told members at a meeting of Heads of Delegations (HoDs) that more time might be needed in order to come to a conclusion in case of each and every negotiating process.

India’s Union Minister of Commerce & Industry, Consumer Affairs, Food and Public Distribution and Textiles, Piyush Goyal regretted during the thematic session on Agriculture on June 14, 2022, that while already it was a delayed MC12 as it is almost time for the 13th MC technically now, “we are yet to finalise the permanent solution”.

At the meeting with co-sponsors of TRIPS Waiver at MC12, where Jerome Walcott, Minister of Foreign Affairs and Foreign Trade of Barbados, updated members on the negotiations for a WTO response to the COVID-19 pandemic, including the TRIPS waiver, Indian Minister Goyal said: “…the kind of fights over small commas, full stops, one word here or there, seem to suggest that this will continue through the 5 years if anybody was to try and take the benefit of this agreement so that whoever makes such an effort will get frustrated and not a single plant to make manufacturing of (COVID19) vaccines will come with this.”

Goyal further remarked during the thematic session on Agriculture that the temporary declarations were not going to help the countries but the permanent solution to public stock holding, pending for more than 9 years, was not yet being taken up for closure.

“Right from the Uruguay round where after 8 years of negotiations between 1985-86 and 1994 when the Marrakesh agreement was decided led to the establishment of WTO, agriculture always got a raw deal, imbalanced outcomes and those who were distorting markets by granting huge subsidies managed to secure their subsidies, which were prevalent at that point of time and deprived the other nations, the developing nations from their ability to grow and take prosperity to their people,” Goyal said. He added: “What we are discussing are the rules of an agreement largely suited to the developed countries, which work for their socio-economic situation already give higher entitlement for the developed world and the calculations under which the developed world is questioned are flawed based on certain situations prevailing 35 years ago and without any relevance to today’s situation in either terms of growth in prices, inflation, changing dynamics with absolutely no system of calibrating it over the years, we landed up freezing that at the 86 levels and today we are suffering the consequences of that.”

Goyal concluded by urging the membership of the WTO to seriously reflect on the programme of a permanent solution to public stockholding being finalised at the MC 12, “sending a message to the world that we do care, we care for the poor, we care for the vulnerable, we care for food security, we care for a far more balanced & equitable future for the rest of the world”.

The text on the World Trade Organization (WTO) agriculture negotiations MC12 may not represent the full extent of the ambition some members would have liked to see for such an important subject, but as Betty Maina, Kenya’s Cabinet Secretary, Ministry of Industrialization, Trade and Enterprise Development, said, “there is an indication of a commitment to continue discussing all the specific concerns of different countries after MC12, and hopefully approach MC13 with some greater progress”.

Many members expressed readiness to restrain themselves from amending the existing language of the text on the WTO agriculture negotiations so that a decision can be reached before the end of the Conference. “For those who still have concerns, I hope I can persuade you that we can work on a work programme to address the concerns that you still have after this meeting so long as we can reach a decision to continue the discussion,” Maina, who facilitated the thematic session, said.

On the third day of the ministerial gathering on June 14, 2022, WTO members also continued efforts toward reaching a long-awaited agreement on curbing harmful fisheries subsidies and reaffirmed their intention to pursue convergence on texts related to agriculture.

The thematic session on fisheries subsidies was facilitated by Damien O’Connor, Minister of Trade and Export Growth of New Zealand, who said that overwhelmingly statements made by members stressed the need to conclude an agreement after more than 20 years of discussions. “I am, as always, optimistic about what I have heard today and that we can get to an agreement,” said O’Connor, who together with the chair of the fisheries subsidies negotiations, Ambassador Santiago Wills of Colombia, will continue to consult and meet with members in different configurations to reach an outcome.

“It’s also clear that for most of you the differences are not that big, and that they are within the ranges of the draft text. Having said that, it’s clear that there are some members that are outside the ranges that we have talked about. I’m not questioning the reasoning behind these positions, but I would note that they do not seem to have attracted convergence or consensus,” he added.

A total of 67 members took the floor during the fisheries thematic session.

India said it stands with its fishermen and urged that the outcomes of the fisheries subsidies negotiations provide level-playing field, equity and thrust to the artisanal and small-scale fishers, who are the backbone of global fisheries.