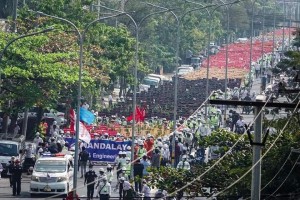 We present excerpts from a 52-page report submitted to the Human Rights Council on March 4, 2021 by the UN Special Rapporteur on the situation of human rights in Myanmar, Thomas H. Andrews. In the report Andrews details how the Myanmar military illegally overthrew the civilian government and proceeded to attack the people of Myanmar by committing the crimes of murder, assault and arbitrary detention.

On 1 February 2021, the Myanmar military overthrew the civilian government in an illegal coup d’état. After declaring itself the “State Administrative Council” (SAC), the junta began committing human rights violations, including murder, arbitrary detention, beatings, and probable enforced disappearances. The SAC also instituted laws and policies to suppress freedom of expression, freedom of peaceful assembly and association, and the right to privacy. The coup completely overturned the rule of law in Myanmar.

Despite the junta’s threats, including a message delivered on national television that those participating in protests could “suffer loss of life,” a nonviolent nationwide civil disobedience movement (CDM) emerged, transcending ethnicity, religion, and socioeconomic status. Millions have demonstrated in hundreds of townships opposing military rule.

Since 1 February, the junta arbitrarily detained over 1,200 individuals and killed at least twenty-three people. At the time of writing, violent confrontations and arbitrary detentions are increasing at an alarming rate. Facing an economy shrivelling under the weight of a powerful civil disobedience movement, Min Aung Hlaing threatened striking civil servants with “disciplinary actions” if they failed to return to work. The people are undeterred.

On 8 November 2020, national elections were held throughout Myanmar. The National League for Democracy (NLD) won an outright majority, winning 396 out of 476 seats while the military-backed party, the Union Solidarity and Development Party (USDP), won 33.

The USDP alleged massive fraud and the military demanded that the Union Election Commission (UEC) investigate allegations of voting irregularities, despite independent monitors not reporting any evidence. The Myanmar military alleged first 8.6 and then 10.5 million instances of irregularities in voter lists spread over 314 townships. The military argued these alleged irregularities could have changed the outcome of the election.

On 26 January 2021, a military spokesman warned it would “take action” if the election dispute was not settled, adding: “We do not say the military will take power. We do not say it will not as well.” Commander-in-Chief Min Aung Hlaing then said the constitution could be “revoked,” further raising fears of a coup. The military then deployed military vehicles, including armored personnel carriers, to the streets of Yangon, Naypyitaw, and other locations.

On 28 January, the UEC announced there was no evidence to support the claim of widespread fraud. It said it was investigating 287 complaints, acknowledged that duplication of names appeared in some lists, but stressed that voters could not cast multiple ballots with fingers marked in indelible ink. This finding cleared the way for the new Parliament to be seated on 1 February.

With tensions rising, the NLD and military reportedly held talks in the days leading to 1 February. Military representatives allegedly demanded delaying the convening of Parliament, disbanding the election commission, and re-examining votes under military supervision. Min Aung Hlaing publicly stated that the military’s remarks regarding a coup and the constitution were misunderstood. Reports and subsequent actions indicate that the talks failed. Overthrowing the Elected Government

Beginning at 3:00 am on 1 February, before newly elected parliamentarians could be sworn in, the military began its unlawful coup d’état. The military enforced a near nationwide telecommunications shutdown, cutting voice, text, and mobile Internet services. The military then seized control over the legislative, judicial, and executive branches of government; arrested dozens of government officials, including State Counsellor Aung San Suu Kyi and President Win Myint; detained activists; and placed duly elected parliamentarians under house arrest in Naypyitaw.

On 1 February, the Myanmar military declared a state of emergency by invoking Article 417 of the Constitution, which permits a military takeover for one year in the event that the President declares a state of emergency that threatens the country’s “sovereignty” or “dissolution” or preservation of “national solidarity.” The junta announced the creation of the “State Administrative Council” with Min Aung Hlaing as Chairman. The junta then appointed new heads of government ministries, replaced UEC members, amended and instituted new draconian laws, appointed new justices to the Supreme Court, and set out five conditions necessary for stepping down: reconstituting the UEC, tackling COVID-19, improving the economy, restoring “eternal peace” with Ethnic Armed Organizations (EAOs), and holding democratic elections.

Even if certain election irregularities existed, they would not justify declaring a state of emergency, seizing the levers of administration, and detaining the civilian leadership and members of civil society. When considering even the loose phrasing of Myanmar’s Constitution, allegations of voter irregularities do not rise to the level of the constitutional conditions precedent for the lawful invocation of Article 417 state of emergency, which may be done only in situations that may “disintegrate the Union,” “disintegrate national solidarity,” or “cause the loss of sovereignty.” Moreover, these situations must be caused by certain types of “acts” or “attempts,” which are listed as: “insurgency,” “violence,” or “wrongful forcible means.” Concerns over voter lists do not rise to this level.

Additionally, the military’s seizure of power was procedurally unlawful under the Constitution. Under Article 417, only the President of Myanmar can declare a state of emergency and only after consulting with the National Security and Defense Council. However, because the Myanmar military had unlawfully ousted President Win Myint, he was unable to publicly declare anything, let alone a state of emergency. Military-appointed Vice President Myint Swe unlawfully declared a state of emergency. Under Article 421(a), the President is required to seek parliamentary consent (“submit the matter of transferringsovereign power”) in a regular or emergency legislative session. This, of course, did not occur because parliament had been dissolved.

Under the military-drafted 2008 Myanmar Constitution, this coup is illegal. The generals violated their own rules when they seized control of the government. The SAC and its actions are thus illegitimate.