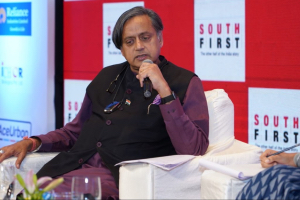 Shashi Tharoor’s likely candidature for the upcoming presidential election of the Congress Party has infused a new interest in the Congress Party, notwithstanding his victory or defeat.  The odds seem heavily stacked against a living encyclopedia of English and an author of 23 books, but his ostensible audacity to throw his hat in the rings, does deserve a thumbs up. Another candidate’s name in circulation, who may be in the fray is veteran Ashok Gehlot – the Chief Minister of Rajasthan.

Significantly, the Congress interim president Sonia Gandhi reportedly seems supportive to the idea of a contest for the Congress’s president post. Tharoor had met Sonia yesterday, and she apparently told him that she only had a neutral role in the whole affair.

Tharoor unequivocally is a writer-intellectual, who also has his own share of controversies following the mysterious death of his second wife Sunanda Pushkar. Can his victory, that seems hypothetical at this stage, pave the way towards the party regaining its vibrancy? Will he be a a shadow president or will move the party away from the influence of Gandhi- Nehru family which, if indications and conventions are to be lent credence to, appears impossible at the moment. After all, it only appears a pipe dream if someone from outside Gandhi Nehru family  rises to the top without the blessings of the Gandhi family!

On the other hand, notwithstanding Sonia’s assurance, will the dynasty ever allow the power to pass on to an outsider who is not the diehard loyalist of the family, what if Tharoor is not a part of the famed G23 in the party who had earlier challenged Sonia’s authority?

The bitter case of PV Narsimha Rao is the grim reminder of the same. Another unsavoury episode of an octogenarian Sita Ram Kesri locked inside the bathroom, comes readily to our mind. Tharoor may be a loyalist, yet he hasn’t proved himself to be a diehard to be trusted. Besides, can his pedigree and credentials inspire confidence among the members of the Gandhi family? On surface at least, Tharoor does not fit the bill. Especially, after Sonia’s bitter experience with Rao, is she prepared to risk an independent minded person that Tharoor projects himself to be. Not very long ago, in 2006, he ran, although unsuccessfully, for the post of United Nations Secretary-General!  So isn’t Tharoor rather too independent to be trusted?

Gehlot, on the other hand, has been a trusted loyalist whom the Gandhis  can trust. Hence, if he agrees to contest–for he is least interested to relinquish the chief ministership of Rajasthan – he may be backed by the Gandhi family.

In the final analysis, therefore,  the upcoming presidential contest will be an interesting spectacle to watch. Tharoor and Gehlot are the early birds but then, as they say, there are many a slip between the cup and the lip. Not to mention that at the moment, all eyes are on the Congress scion Rahul Gandhi’s Bharat Jodo Yatra.

*Vivekanand Jha is the author of the book The People’s Leader, based on the life of Saryu Roy. He is an author, academician and public intellectual. He is also the Convener of the online show on YouTube, Education pe Charcha.