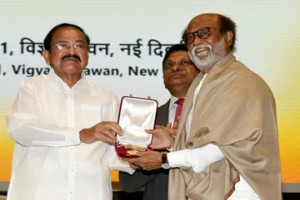 Popularly known as Thalaivar, which in Tamil means Leader or Boss, the South Icon dedicated the award to his mentor K Balachander. Naidu, while congratulating Rajnikanth for winning this year’s Award,  said that the iconic thespian’s unmatchable style and acting skills “have indeed given a new dimension to the Indian film industry”.

Mentioning his memorable performances in MoondruMudichu, Sivaji: The Boss, Vayathinile, Bairavi, the Vice President said the Thalaivar epitomizes the perfect balance between artistic expression and mass appeal, something all young film-makers could do well to attempt.

Before deciding to take up an acting course in the newly formed Madras Film Institute after coming across an advertisement, Rajnikanth had performed several jobs including that of a coolie, and a bus conductor at Bangalore Transport Service (BTS).

His acting career commenced with K. Balachander’s 1975 Tamil drama Apoorva Raagangal. However, it was the Suresh Krissna-directed Baashha (1995) in which he played a crime boss, that earned him a ‘god-like’ status in Tamil Nadu.

He is the only Indian actor to be featured in the Central Board of Secondary Education (CBSE) syllabus, in a lesson titled From Bus Conductor to Superstar.

Rajnikanth’s charisma transcends regions and languages and his appeal mesmerised all including the youth, women and even politicians. This was reflected as congratulatory messages started pouring in on twitter from his fans.

Union Minister for Information & Broadcasting and Youth Affairs & Sports, Anurag Thakur tweeted, “ You are not only a legendary icon, but an institution for the world of Indian Cinema!” Odisha Chief Minister Naveen Patnaik tweeted: “Congratulate iconic actor @rajinikanth on receiving the prestigious #DadasahebPhalkeAward. He is a versatile entertainer and contributed immensely to Indian Cinema. Conferment of India’s highest film honour is a befitting tribute to the ever popular actor.” Incidentally, Rajnikanth’s son-in-law Dhanush too received this year’s National Award for the best actor along with Manoj Bajpayee. The Jury for the 67th National Film Awards announced the winners for the year 2019 here today.

The award for best non-feature film for the year 2019 was given to An Engineered Dream (Hindi) produced and directed by Hemant Gaba, while the award for best feature film was accorded to Marakkar-Arabikkadalinte-Simham (Malayalam) directed by Priyadarshan. Kastoori got the Best Children’s Film award, while  Shrikshetra- Ru-Sahijata  won in the best Arts and Culture Film category.

Tajmahal (Marathi) was awarded Nargis Dutt Award for Best Feature Film on National Integration. Kangana Ranaut has been awarded Best Actress for her role in Manikarnika–The Queen of Jhansi (Hindi) and Panga (Hindi).

The State of Sikkim received the most film-friendly state award.