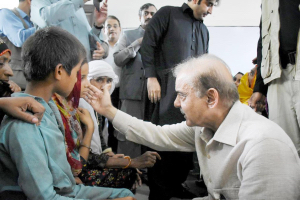 Islamabad/Cairo/Geneva: Over 1290 lives are lost and 12,500 people injured in Pakistan floods so far. Over 33 million are affected, including over 6.4 million in dire need of humanitarian aid. Almost 634,000 displaced people living in camps.

Tens of millions of people are now forced to use unsafe water, both to drink and for their daily needs; they are also exposed to the elements due to flood damage and destruction of their homes, and many are displaced. This has resulted in increased exposure to diseases already circulating in the country, including acute watery diarrhoea, malaria, dengue fever, typhoid, measles and leishmaniasis. The outbreaks of these diseases and polio are at risk of being further exacerbated, the World Health Organization warned today, adding that increased transmission of malaria remains a threat and many cases are already presenting to clinics in the flood-affected areas.

Early disease surveillance indicates that tens of thousands have been identified as patients affected by diarrhoea, malaria, acute respiratory infections, skin and eye infections, and typhoid. Other diseases in the country, such as polio and COVID-19, are also at increased risk of spreading if the situation is not rapidly contained.

Thousands of pregnant women have lost access to health facilities and services for the safe delivery of their babies, increasing the risk of medical complications as their options are limited to delivery at home.

“The current scale of damage and destruction due to the floods is like none seen before in Pakistan – a result of long-term global climate change leading to more severe weather conditions, Dr Ahmed Al-Mandhari, WHO Regional Director for the Eastern Mediterranean, stated today. He said that those needing medical attention for existing conditions will face diminished access, while tens of thousands of people, including children, need psychosocial support and mental health services to cope with the enormous losses they are experiencing and destruction they are witnessing.

Over the past few weeks, we have scaled up disease surveillance in flood-affected areas and delivered essential medicines, medical supplies and testing kits to functional health facilities and laboratories.

As Pakistan faces one of the worst natural disasters in recent history, Dr Al-Mandhari urged the international community – and especially the Member States of WHO’s Eastern Mediterranean Region to come together and help the people of Pakistan. “Millions of men, women and children have already lost their homes and their livelihoods – they should not lose another basic right: the right to health care,” he said.