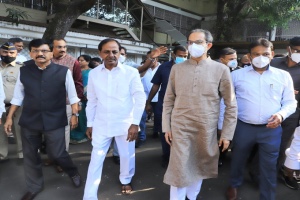 New Delhi: Telangana Chief Minister Kalvakuntla Chandrashekhar Rao (KCR) is all set to float a new national political party. To this effect, KCR may announce his new outfit in another 10 to 15 days time in New Delhi, according to sources. The name of the new political party is yet to be named, but sources say that it could be Bharat Rashtriya Samithi (BRS) and might be registered soon with the Election Commission. It is being speculated that KCR might ask for the ‘Car’ symbol for the proposed political party.

For quite sometime, KCR has been advocating for Third Front or Federal Front or National Front at the national level to keep away from BJP and Congress. In fact , for the last two years KCR had been visiting various state capitals and meeting regional party leaders as well as regional party Chief Ministers and pressing for effective “cooperative federalism” in the country which could be achieved through a third alternative platform consisting of regional parties to air their grievances at the national level. In this regard , during the last six months , KCR knocked every regional party door as well as the Left Parties.

Last month, KCR met Delhi Chief Minister Arvind Kejriwal, Samajwadi Party chief Akhilesh Yadav and also former prime minister and Janata Dal (Secular) leader HD Deve Gowda but could not achieve what he wanted and he found many contradictions and political interests among them . In fact, for the last one year or so , KCR held a series of meetings with the top leaders of various political parties including the Shiv Sena, the Dravida Munnetra Kazhagam, the Samajwadi Party, the Rashriya Janata Dal, Janata Dal (Secular) but nothing materialised with regards to forging a front alternative to the BJP and the Congress. Added to this, other respective regional satraps of West Bengal , Orissa and Andhra Pradesh— Mamata Bannerjee, Naveen Patnaik and Jagan Mohan Reddy—- also did not take any lead .

In other words, frustrated KCR came to the conclusion that the country had seen several fronts earlier in the past but did not yield desired results. He decided to come out of the routine political system of fronts and decided to form his own party. In fact, the idea of floating a new national party was not an over night decision. He has been hinting of late about the need for a national party and his Telugu Rashtra Samithi (TRS) playing an active role at national level. During the TRS plenary session in April 2022, to mark its 21st foundation day, KCR hinted at floating a national party. In fact, in one of the resolution passed at the plenary, the TRS stated that it will play a key role in national politics in the coming days.

Political circles here are tight-lipped with regards to KCR’s new venture. Sources say that one of the strategy is that through the proposed new national party, KCR is likely to present before the nation the successful model of Telangana State and his innovative welfare schemes. Besides, the TRS may highlight the progress made on various fronts during the last 8 years and it may initiate a nationwide debate to study Telangana’s progress.

In this background, the Telangana CM, on June 10, held an emergency meeting on the new national alternative, upcoming Presidential elections, monsoon session of the assembly and the latest political developments. Entire top leadership of the TRS party was involved in the deliberations, which went on for six hours. Referring to the new national party, KCR hinted that a decision would be taken at a meeting of the TRS State Working Committee on the 19th of this month.

Sources said that during his meetings with top leaders yesterday, KCR blamed the BJP rule at the Centre particularly the Prime Minister for ‘practicing communal politics and polarising the country’. He said BJP’s atrocities have increased. The people of the country are waiting for an alternative political force because the Congress has failed to play the role of a responsible opposition. “The new party will play this role. The party will use the July 18th Presidential elections as a platform for the creation of an alternative national force. This is the right time to unite various political forces across the country and teach BJP a lesson by defeating the NDA candidate in the Presidential poll” KCR said in the meeting adding that from now onwards TRS will be more active in national politics.

KCR also told his top leaders and ministers that Telangana regime and its welfare schemes are getting positive responses across the country. The Union government is suppressing the federal spirit in the country and is also imposing restrictions on loans to impede development and welfare programs in the States. He said “ Let’s face it. Let’s meet with like-minded parties and formulate a strategy. Let’s put pressure on the Union government to lift sanctions. Be prepared for a legal battle for this”.

Party sources said that KCR has considered Jai Bharat, Naya Bharat, Bharat Rashtriya Samiti etc as the possible name for the new national party. It is learnt that the Chief Minister had also sought the views of the ministers on the issue of party name and flag. If things go right, sources said that KCR might announce the formation of the new party before the BJP National Executive in Hyderabad in the first week of July.