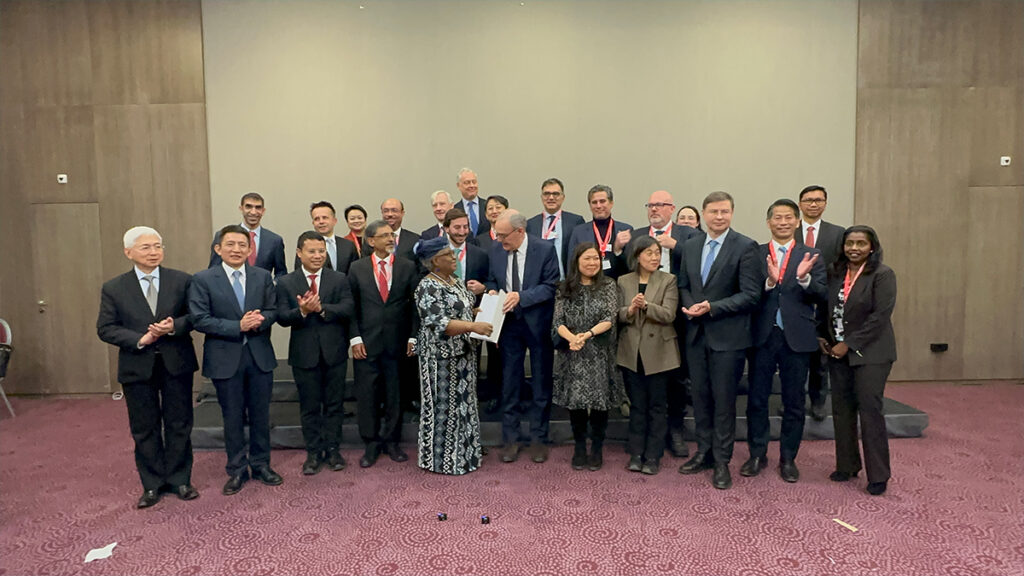 Swiss Minister Guy Parmelin, Head of the Federal Department of Economic Affairs, Education and Research, presents his country’s instrument of acceptance of the WTO Agreement on Fisheries Subsidies to DG Okonjo-Iweala at the informal WTO ministerial meeting held on the side lines of the World Economic Forum’s annual meeting in Davos, Switzerland.

Davos: Switzerland became the first World Trade Organization (WTO) member to formally submit its acceptance of the WTO’s new Agreement on Fisheries Subsidies, here today. This paves the way for the historic agreement for ocean sustainability to enter into force.

“Switzerland is the first WTO member to ratify the Agreement on Fisheries Subsidies. The prohibition of harmful marine capture subsidies is a major contribution of the multilateral trading system towards achieving the UN’s sustainable development goals,” Parmelin said.

Adopted by consensus at the WTO’s 12th Ministerial Conference (MC12) held in Geneva on 12-17 June 2022, the Agreement on Fisheries Subsidies sets new binding, multilateral rules to curb harmful subsidies, which are a key factor in the widespread depletion of the world’s fish stocks.  In addition, the Agreement recognizes the needs of developing and least-developed countries (LDCs) and establishes a Fund to provide technical assistance and capacity building to help them implement the Agreement.

The Agreement prohibits subsidies to illegal, unreported and unregulated (IUU) fishing, and bans subsidies for fishing overfished stocks and for fishing on the unregulated high seas. Members also agreed at MC12 to continue negotiations on outstanding issues, with a view to making recommendations by MC13 for additional provisions that would further enhance the disciplines of the Agreement.

Acceptance from two-thirds of WTO members is needed for the Agreement to come into effect.

DG Okonjo-Iweala said Switzerland’s action will create real momentum for more WTO members to formally accept the Agreement. She expressed her gratefulness to Switzerland for its leadership in being the first WTO member to submit its instrument of acceptance of the historic new Agreement on Fisheries Subsidies.