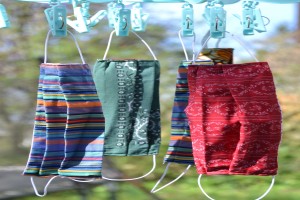 New Delhi: With the surge in the daily new cases and the spike in the daily fatalities in UT of Delhi, the spillover effect is also being observed in the National Capital Regions within the states of Haryana and Rajasthan where the number of COVID positive patients is on the rise, the Ministry of Health and Family Welfare stated today.

While the MoHFW today deputed high level Central teams to Haryana, Rajasthan, Gujarat and Manipur, the Delhi Chief Minister, Arvind Kejriwal, increased the fine amount from Rs. 500 to  Rs 2000 that will be imposed on anyone who was found not wearing a mask at a public place. Kejriwal, in a press conference, also mentioned about the slew of measure taken – from increasing beds in hospitals to accommodate COVID patients to increasing fines – in a bid to bring the situation under control. 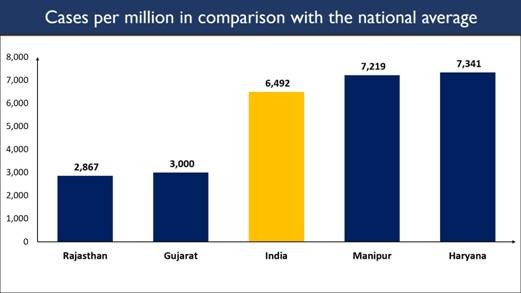 Gujarat reported 1,281 fresh cases of COVID-19 in the last 24 hours, taking the state’s tally to nearly 1.92 lakh. Several districts, including Ahmedabad, recorded a spike in cases following Diwali. The state’s daily tally had last crossed 1,200 over a month ago. Meanwhile, testing dropped to fewer than 50,000 samples a day. Officials of the Ahmedabad Municipal Corporation(AMC) met to review the availability of beds in the designated hospitals in the city following the surge. The state government said it is increasing daily testing for the virus in order to detect new cases and contain its spread after noticing a spike in the last few days.

In Rajasthan, the number of active cases of COVID-19 has once again crossed the 19,000 mark after 26 days. 2,178 new cases have been reported in the state on Wednesday. Jaipur and Jodhpur districts are the most affected. A large number of new infections are being reported from Bikaner, Alwar, Ajmer and Kota. More than 40 lakh samples have been tested in the state so far. The state government has decided to provide pulse oximeters to ASHA Sahyoginis in view of the increasing numbers of the infections in rural areas. Chief Minister Ashok Gehlot has said that people in rural areas should not take this disease lightly. They should wear masks and fully comply with other health protocols.

Maharashtra’s COVID-19 tally rose to 17,57,520 with the state reporting 5,011 new cases of infection on Wednesday. Notably, the daily spike in the cases had hovered around 3,000 in the last few days. With Diwali festivities over, the Brihanmumbai Municipal Corporation (BMC) expects a swell in cases fuelled by crowded shopping areas and public transport systems.The civic body has begun week-long targeted Covid-19 testing of hawkers, shop owners, helpers and transporters in crowded markets, BEST and State Road Transport Corporation drivers to tap possible super-spreaders.  Additional Municipal Commissioner Suresh Kakani informed that the city civic body had set up 10 free testing centres in each of the city’s 24 civic wards.

The teams will visit the districts reporting high number of COVID cases and support the State efforts towards strengthening containment, surveillance, testing, infection prevention and control measures, and efficient clinical management of the positive cases.