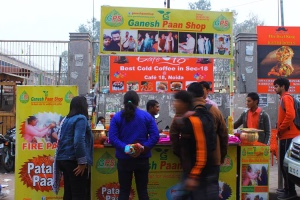 With five states in the poll bound phase, there were many self proclaimed pundits who wanted their voices to be heard. Besides, there were also people looking up to me for what to expect as the outcome of the electoral battles in the five states.

As I kept sipping my green tea, seated next to Amir at our regular Irani restaurant, it was a regular morning walker who trooped in for his morning quota of lemon tea and bun butter that goes with it.

Now Amir used to keep introducing me to his old time customers as a press reporter. This landed me in endless spots of trouble as the old timers started regarding me as a single point of contact to learn about anything and everything that kept occurring around the globe.

That morning, it was Little Mohan’s turn to query me about poll prospects of the Bharatiya Janata Party in the five states.

His nickname Little Mohan was akin to people getting the tag Chhotu owing to their size. Little Mohan was querying me on how to get a honest opinion about each Party’s poll fortunes. Which media channels can be trusted for this purpose?

I paused and then told him, news gathering, especially on the electoral front, takes place at your neighbouring paan wala‘s outlet. Television channels could fare better at their forecast, if they have the humility to cross check with the local paan wala.

What on earth have paan walas got to do with election forecasts?  I heard that big money is splashed into the poll fray.

“Look Mohan, way back in 2012, all media channels hyped Rahul Gandhi travelling in Mumbai’s suburban train. They also gave heavy footage to his visiting Dalit homes and sharing meals with them.”

“I casually queried my regular paan wala. He told me that Samajwadi Party will come to power in Uttar Pradesh under the stewardship of Akhilesh (Yadav). The media hype created about Rahul Gandhi lacks substance. The media any way is far off mark.”

Needless to say he was spot on without bothering about any of the media channels.

“You mean to say our paan walas are the only ones to be trusted with news gathering?”

I smiled at Mohan. “A chai wala can be trusted as prime minister. Why not trust paan walas as news gatherers or election forecasters?”

Little Mohan was still not finished. He wanted to know how this logic will work in a state like Goa.

“Look Mohan, Mumbai has its fair share of Goans who love talking about football, Fenny and Francis Xavier. Instead of paan walas, just walk into the old bakery stores of Bandra. Get talking to the owners and they will provide you with an accurate forecast.”

“Do you have any idea of how to get it right in the Punjab polls?”  “Yes Mohan. We have a mini Punjab in Sion Koliwada. You can pick up from gossip at any of their dhabas that serve mouth watering tandoori items.

In short, if you want to know who is going to win, you just have to go to the people. The decision anyway rests with the people and not media channels.
Also read: Sunday Snippets: Wait till it rains ice in Mumbai
0
0
Tags: elections Forecaster Paan Snippets Sunday Sunday Snippets