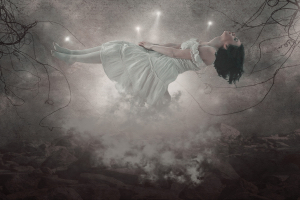 I was in my first year of engineering when a book on Out of Body Experiences (OBEs) or astral travel caught my eye in our college library. The book was penned by Susan Marshall. It was an exciting read.

With so many years having passed by, I still recall the exercises the author had recommended to facilitate astral travel. The simplest one was to visualize a circular two-dimensional object with different colours. The next step was to visualize the disc rotating at different speeds. Then there was talk about going to bed thirsty. You were supposed to keep a glass of water at a distance from where you lie down to sleep. You just keep imagining yourself walking to the spot and drinking the water repeatedly in your mind.

Interestingly, the book also dwelt on near-death situations that had accidentally triggered astral travel. In such instances, there were people who were declared clinically dead and subsequently came back to life. One such astral traveller who returned to his body after being operated upon by doctors was able to minutely describe each and every step the doctors adopted in his treatment along with the correct medical terminology and names.

As per the author’s account, in astral travel, you can only witness. You cannot go into action or initiate anything. I jokingly discussed this with my colleagues in the first year of engineering. I told them I have plans to get an OBE that will make me able to witness the question papers well in advance of our examinations. Needless to say, it made me an object of many butts. However, as I kept working on astral travel, supporting my endeavours with regular meditation, I was able to leave my body from the astral plane. The experience was fraught with fear that made my astral body return to ground zero.

Later on, I discussed astral travel with others who had an interest in the pursuit of the occult. I was informed that it was always better to attempt it under the guidance of a proper Guru. I was also told about the perils of directing your OBE in such a way that your astral travel safely ends after returning to your original body. The author may be for lack of proper explanation terminology chose to call the astral body as a double of your body.

Susan Marshall’s last section on triggering an OBE talked about how narcotic drugs were put into use to achieve the result. The use of narcotic substances that can cause hallucinations besides triggering an OBE experience was, however, rated as risky by the author.

Later, I read several books on astral travel. I came to learn that astral travel can be useful for gaining insight and knowledge in various streams of life. However, it requires a good ambience to be set so that people around you are informed about your decision to make an astral journey and keep the original body undisturbed till you return from the astral plane.