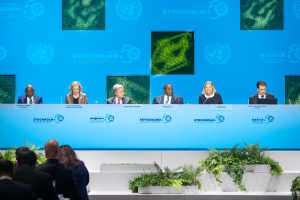 Stockholm: Fifty years after Sweden hosted the first-ever United Nations Conference on the Human Environment, and with the world facing a triple planetary crisis of climate change, biodiversity loss and pollution, governments, civil society, young people and the private sector today gathered for an international meeting – Stockholm+50 – to spur urgent action for a healthy planet for the prosperity of all.

“The crisis for our environment and climate affects people all around the world. The developed countries are the ones who pollute and have polluted the most. But the poorest are hit the hardest,” Prime Minister Andersson said in her opening remarks. “We must ensure that no country is left behind. And we must ensure that no person is left behind. The climate transition can only be done if it’s made in a social and inclusive way. This is not just an option. This is our moral obligation.”

Speakers stressed the need for decisive action to transform the global economy and humanity’s relationship with nature for people and planet to thrive.

“We have an exceptional opportunity to turn climate and environmental commitments into action, if we work together as a community of nations. Heightened ambition in financing and implementation should be at the core of these actions,” said President Kenyatta of Kenya, which has hosted the UN Environment Programme (UNEP) since it was established following the 1972 Stockholm Conference.

UN Secretary-General António Guterres warned that “global well-being is in jeopardy, in large part because we have not kept our promises on the environment.”

“We need to change course – now – and end our senseless and suicidal war against nature,” he said. “We must place true value on the environment and go beyond Gross Domestic Product (GDP) as a measure of human progress and well-being. Let us not forget that when we destroy a forest, we are creating GDP. When we overfish, we are creating GDP. GDP is not a way to measure richness in the present situation in the world. Instead, we must shift to a circular and regenerative economy.”

Representatives from civil society who will be speaking include youth leaders Ugandan Vanessa Nakate, Iraqi Reem Al-Saffar and Christianne Zakour from Trinidad and Tobago, and Joan Carling, founding leader and co-director of Indigenous Peoples Rights International. Representatives from the private sector, academia and faith groups will also be part of the discussions.

“Stockholm+50 is a chance for the world to commit, once and for all, to delivering these transformations. This conference is a chance to amplify a global movement for a more caring world,” said Inger Andersen, Secretary-General of Stockholm+50 and Executive Director of UNEP. “A world in which the needs of youth, vulnerable communities and indigenous peoples are more important than the demands of the elites for more wealth and power. A world that creates relationships of trust. A world in which people live in harmony with nature. A world that turns commitment into action.”

Stockholm+50 will feature four plenary sessions in which leaders will outline the bold and urgent action needed to safeguard planetary health and accelerate the implementation of the 2030 Agenda and the Sustainable Development Goals. Three Leadership Dialogues will focus on reflecting on the urgent need for actions to achieve a healthy planet and prosperity of all, achieving a sustainable and inclusive recovery from the COVID-19 pandemic, and accelerating the implementation of the environmental dimensions of Sustainable Development, producing clear and concrete recommendations and messages for action at all levels.

Hundreds of side events, associated events and webinars – including many held ahead of and after the meeting – will address relevant themes of Stockholm+50 and further expand the scope of the conversation.

In the lead-up to Stockholm+50, a series of regional multi-stakeholder consultations were organized in Africa, Asia and the Pacific, Europe, Latin America and the Caribbean, and West Asia, with the aim of engaging as many stakeholders as possible.

The preparatory processes for the conference have already produced strong messages on the need for transformations of high impact sectors through just and fair transitions, alignment of finance flows with the 2030 Agenda and Multilateral Environmental Agreements, for systems-wide signals to correct our current economic systems, and for the adoption of the human right to a healthy environment.