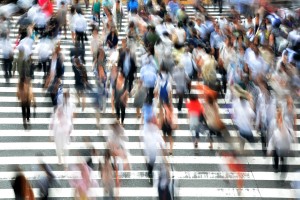 New Delhi: Five states – Maharashtra, Punjab, Karnataka, Gujarat and Chhattisgarh – continue to report a surge in the daily new COVID -19 cases, and now together account 80.63% of the daily such cases, the Ministry of Health and Family Welfare stated here today.

Of the ten worst affected districts nine are in Maharashtra alone – Pune, Nagpur, Mumbai, Thane, Nashik, Aurangabad, Jalgaon, Nanded, Amravati. Night curfews have been clamped in these district. Another district in the top ten worst affected districts is Bengaluru (Urban) but the Karnataka Chief Minister said there was no plan to impose curfew there as of now. In Madhya Pradesh, Chief Minister Shivraj Singh Chouhan announced night curfew in Indore and Bhopal from 10 pm to 6 am. and also ordered shops to be closed after 10 pm in , Betul, Burhanpurl, Chhindwara, Gwalior, Jabalpur, Khargone, Ratlam, and Ujjain. In Uttar Pradesh, the district administrations of Noida and Ghaziabad have invoked the provisions of Section 144, banning assembly of four or more persons at a place, respectively till April 30 and May 10, 2021. 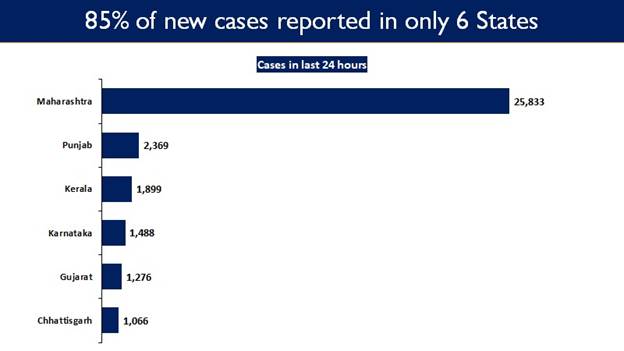 Maharashtra continued to report the highest daily new cases at 25,833, 65% of the daily cases, followed by Punjab with 2,369 while Kerala reported 1,899 new cases in the last 24 hours ending 7 am today. 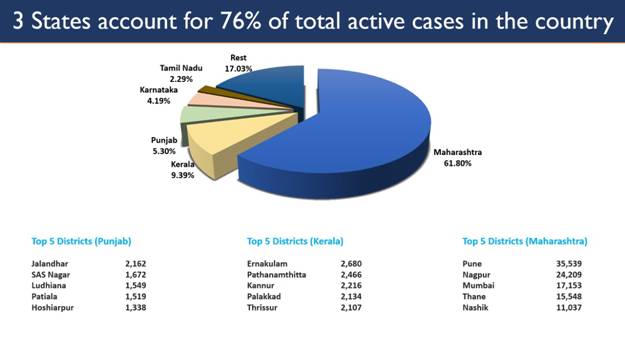 Following the steep rise in new cases, in Punjab, night curfew are now in place from 9 pm to 5 am, instead of 11pm to 5am, in nine districts namely Amritsar, Gurdaspur, Hoshiarpur, Jalandhar, Kapurthala, Ludhiana, Mohali, Patiala, and Ropar. All these districts are reporting more than 100 cases daily. In Gujarat, night curfew timings increased by an hour – from 9 pm to 6 am in Ahmedabad. Earlier on Tuesday the state government had revised the timings of the prevailing night curfew from 12am to 6am to 10pm to 6am in four major cities, as a containment measure.

The eight States, as under, had been displaying an upward trajectory in daily new cases. 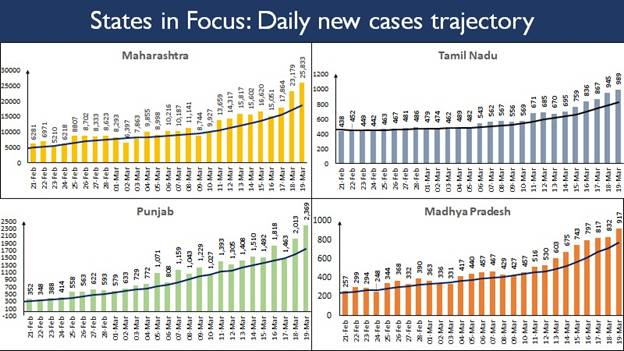 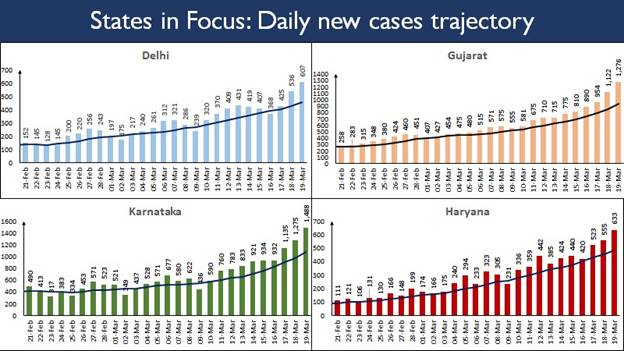 Meanwhile, the Centre has advised all State and UT governments to improve testing in districts reporting reduction in testing and increase the overall share of RT-PCR tests (more than 70%), especially in districts dependent on high levels of antigen testing in line with the ‘Test Track & Treat’ strategy of the government.

While advising States to focus on surveillance and stringent containment of those areas in selected districts which are seeing cluster of cases and focus on clinical management in districts reporting higher deaths, the Centre also told States/UTs  to carry out an average close contact tracing of minimum of 20 persons per positive case (in the first 72 hours) along with isolation and early treatment of the serious cases as per clinical protocol.

The States and UTs have further been  told to follow up on sending samples for genome testing to track virus variants of concern. “All States/UTs have been tagged to 10 national labs under the INSACOG consortium with National Center for Disease Control (NCDC) as the nodal institute. States/UTs have been asked to limit the gathering in public places along with promoting COVID-appropriate behaviour through communication and enforcement and accelerate vaccination for priority population groups in districts reporting higher cases. Accelerating the pace of vaccination has also been stressed upon,” the Ministry stated.

Recently, the Centre had deputed high level Public Health teams to Maharashtra and Punjab to assist in COVID-19 control and containment measures in view of recent spike in cases in these States. The Central Government had earlier also deputed high-level teams to Maharashtra, Kerala, Chhattisgarh, Madhya Pradesh, Gujarat, Punjab, Karnataka, Tamil Nadu, West Bengal, and Jammu and Kashmir to support them in their fight against the recent spike in COVID-19 cases.

“The reports of Central Teams are shared with the States for further follow up action. The follow up and compliance on part of states is monitored by the Union Ministry of Health,” the Ministry stated.