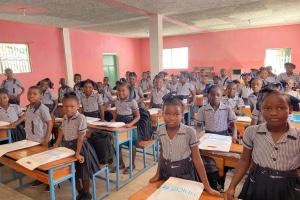 Port-Au-Prince/Panama City/New York: Six months after the devastating earthquake that struck southwest Haiti, more than 1,000 schools in the most affected departments of Sud, Grand’Anse and Nippes are yet to be rebuilt, leaving an estimated 320,000 children to study in environments that are not conducive to learning.

Despite significant response efforts in a very challenging context, more than 260,000 children are still in need of immediate humanitarian assistance.

“Ensuring children can go back to school is not only a moral imperative but also crucial for their health and mental health, nutrition and general well-being,” said Bruno Maes, UNICEF Representative in Haiti.

On August 14, 2021, a magnitude 7.2 earthquake struck the departments of Sud, Grand’Anse and Nippes, and three days later, battered by heavy rains caused by Tropical Depression Grace, affecting 800,000 people, including 340,000 children. According to official data, more than 2,200 people died, some 115,000 homes, 97 health facilities and 1,250 schools were destroyed or damaged.

“The earthquake that devastated the regions of the southern peninsula deprived people of vital access to basic social services. Thousands of women and children still depend on mobile health clinics for treatment or water trucks to get clean water… Without adequate access to water, food, health and education, scores of children and women are in immense and urgent need,” said Maes.

The nutritional and health needs of children affected by the earthquake are significant, and often unaddressed since many health facilities are yet to be rebuilt. In earthquake-affected areas, there is an urgent need for clean water and hygiene services to avoid the resurgence of waterborne diseases such as cholera, after three years without a single case reported in the country.

UNICEF was one of the first actors on the ground to distribute humanitarian assistance to victims. Within 24 hours of the earthquake, UNICEF sent six emergency medical kits containing essential drugs and other supplies to care for 30,000 people, including children, in affected areas.

Incidentally, 234 temporary learning spaces are under construction in 38 schools. Rehabilitation of 900 classrooms in 150 damaged schools has begun.  More than 74,000 students and 1,600 teachers have received learning and teaching material, with U-Reporters contributing to the distribution efforts in their communities.

At the end of 2021, UNICEF had estimated requirements of US$97 million and made a request to this effect through the Humanitarian Appeal for Children to meet the urgent needs of 950,000 people, including 520,000 children,  suffering from the combined impact of the earthquake in 2021, climate-related natural disasters,  the persistent political and socio-economic crisis, insecurity due to gang violence, forced returns, internal displacements and COVID-19.

However, so far, only one-third of the required funding has been raised, UNICEF claimed on February 14, 2022.