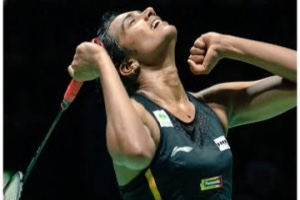 Basel: Ace Indian shuttler Pusarla Venkata Sindhu today steamrolled her way to the second singles title of the season with a straight-game win over Thailand’s Busanan Ongbamrungphan in the title clash of the Swiss Open Super 300. Earlier in January this year, she had got her first Super 300 title by winning the Syed Modi International.

In the finals of the  Swiss Open 2022 women’s singles title, the World number 7 Sindhu beat Busanan Ongbamrungphan of Thailand by 21-16, 21-8. She thoroughly dominated the game and took just 49 minutes to defeat Busanan Ongbamrungphan. In a tweet after winning the title, she said,”Thank you everyone for your immense support and wishes! means a lot”.

Sindhu had lost the Swiss Open final to Carolina Marin last year. However, against Busanan she had an impeccable record and with her win today, the double Olympic medalist  improved her head to head against the Thai shuttler to 16-1.