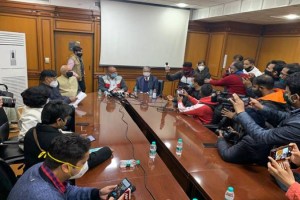 New Delhi: Despite judicial intervention by means of the Supreme Court instituting a panel to hear and report on the demands made by the agitating farmers and other stakeholders over the recent enactment of three farm laws, the protestors picketing at the borders of New Delhi keep sounding an intransigent note, stating the said panel is a pro-government body.

The hearing on what the farmers and other stakeholders have to say in this matter is slated to take place on January 21, 2021. Strongly repudiating the statements made by the agitating farmers, a key member of the SC appointed Panel, Anil Ghanwat emphasised, “We are not and will not be taking sides with any of the stakeholders be it the farmers or the government. In fact, we will stay neutral to the extent that even our personal views on this matter will not be allowed to come in the way of the report we submit to the apex court.”

The SC had appointed a four-member panel earlier on January 11, 2021 to deliberate with concerned stakeholders on recently notified three Farm Laws. However, former Rajya Sabha member Bhupinder Singh Mann opted out of the panel after the farmers raised concerns about the views that were expressed about the Centre’s contentious farm laws in the past. The agitation that continues to persist on the outskirts of the national capital has almost reached the two-month mark. The 56-day long protest was punctuated by nine rounds of talks between the government and the farmers’ representatives albeit unable to end the deadlock.

The first meeting of the committee that was held today, was attended by Dr. Ashok Gulati, Former Chairman of the Commission for Agricultural Costs & Prices,  Anil Ghanwat, President, Shetkari Sanghatana and Dr. Pramod Joshi, Former Director for South Asia, International Food Policy Research Institute. They discussed the roadmap of activities for the Committee for two months to prepare their recommendations after discussion with farmers, farmers’ bodies, farmers’ unions and other stakeholders.

In wake of the crisis, Ghanwat said, “It’s important to convince the farmers of the neutral nature of the role the panel will be playing and make them come to the negotiating table.” Naming the other stakeholders, Ghanwat iterated that besides the farmers, the views of the Centre and various state governments will also be taken into account.”

On being asked about whether there will be any replacement for Mann who has recused himself from the panel, Ghanwat said, “The decision is left to the Supreme Court as the panel has been constituted by it.” Ghanwat concluded stating, “We earnestly ask farmers to come and speak to us as we are not on anyone’s side and we represent only the Supreme Court.”

Addressing the Media,  Ghanwat further said as per the direction of the Supreme Court, the Committee will hold discussion with farmers and farmers’ bodies in the country who are both pro and against the Farm Laws. He said the Committee will also hold discussions with State Governments, State Marketing Boards and other stakeholders such as Farmer Producer Organisations, and Cooperatives.

The Committee will soon send invitations to the farmers unions and associations to discuss their views on Farm Laws. Even individual farmer can submit his/her views on the portal to be notified soon. “The Committee is keen to understand the opinion on the subject of all concerned so that it can give suggestions which will definitely be in the interests of the farmers of India, a Ministry of Agriculture & Farmers Welfare, press note stated.