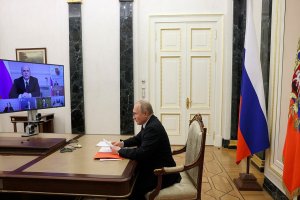 Over the past two months, we held a series of meetings on the economic situation. Together with Government members, heads of regions, senior Central Bank officials and businesses, we have been consistent in our efforts to promote stable economic development.

We have been doing this in a challenging environment. I am referring to the complicated global situation, as well as the pressure applied by Western countries through sanctions. Incidentally, the global crisis is largely caused by these sanctions. Those who conceived them proceeded from short-sighted, exaggerated political ambitions and Russophobia, at the expense of their own national interests, their own economies and the wellbeing of their people, as primarily demonstrated by the rising inflation in Europe. In some countries, the annual rate of inflation is approaching 20%, while prices in the eurozone increased by over 11%, on average.

According to objective laws governing the economy, it is obvious that in this ongoing sanctions frenzy, if I may say so, the European Union and its people will inevitably face consequences that will be hard to reverse. The same applies to the world’s poorest countries, which are already at risk of hunger.

Let me emphasise that full responsibility for all this lies squarely with the Western elites, who are ready to sacrifice the rest of the world for the sake of preserving their global dominance.

In turn, Russia is confidently dealing with external challenges due to the responsible macroeconomic policy of the past few years and systemic decisions and solutions to strengthen its economic sovereignty, technological and food security.

We are expecting a good harvest this year. According to preliminary expert estimates, we may harvest 130 million tonnes of grain, including 87 million tonnes of wheat. If this happens, then the projected grain harvests would hit an all-time high in Russian history. This will make it possible to meet domestic demand, with a substantial safety margin, and to expand global exports for our partners; this is highly important for global food markets.

The national currency, the ruble, is growing stronger in conditions of a record-breaking foreign trade surplus. It appears that it is posting better results than all other foreign currencies since early 2022.

At the same time, I would like to note some trends that require special attention. For example, domestic demand is short of 2021 parameters. Corporate and private accounts continue to shrink. Obviously, these factors impact economic development trends, and it is necessary to reduce these risks by relying on our successful experience of targeted actions during the 2020–2021 pandemic.

As before, today, the most important indicator of successful socio-economic policy is the income of Russian citizens. To ensure positive dynamics here, it is necessary to support consumer demand and improve the opportunities for businesses and regions. Several relevant decisions have already been made. We know about them as we worked on them together. In March, we decided to expand the financial aid programme for families with children in need. From April, it was extended to include families with children aged up to 16 years. Backdated payments have been made since May 11.

We have also arranged for additional financial support for the constituent entities, by restructuring regional debt and granting loans from the federal budget. I would like to note once again that all the procedures must be as clear and convenient for the regions as possible. These mechanisms must motivate regions to finance additional economic development programmes, including a capital boost for regional industrial development funds, and they must also ensure that all obligations and programmes are fulfilled on the ground and that major construction projects are continued. All these measures are compulsory.

With respect to businesses, we have developed a lending programme for backbone companies, secured by VEB. Such loans are expected to amount to 1.6 trillion rubles. There are specific decisions to support key industries such as aviation, agriculture and food production.

Next, in late April, we agreed to take special measures to grant additional resources to the economy – as professionals say, to saturate it with liquidity. This is important for the continuous operation of companies and organisations and for maintaining and even increasing the number of jobs. These measures include deferring social contribution payments for the second quarter of 2022. There was extensive discussion of this matter and a decision was made. Companies which employ almost 52 million people in total will be eligible for this concession.

Social contributions for these organisations will be deferred for a year, starting from May 2023. Overall, businesses will be able to keep around 1.1 trillion rubles in circulation. Essentially, this money will serve as an interest-free loan from the Government. In addition, companies in the production sector will be eligible for social contribution deferment in the third quarter of this year, amounting to another half a trillion rubles.

I have instructed the Government to explore the issue of providing additional preferences with regard to repaying insurance contributions for the third quarter depending on employment and payroll retention. We went through this, as I said, during the pandemic. It is necessary to determine the exact criteria on this score.

Yet another point, as I said, is that we have expanded the programme for the guaranteed support of lending to businesses by VEB. As you may know, an instruction has been issued to extend this programme to companies that are yet to obtain the status of major employers but have already emerged from the category of small and medium-sized businesses. Aided by VEB’s guarantees, these organisations will be able to raise over one trillion rubles at attractive, lower rates due to the risk reduction. Let me also note that the Bank of Russia continues easing its monetary and lending policy and making loans more widely available in general. The Central Bank key rate, as you know, has been reduced to 14 per cent.

*Excerpts from Russian President Vladimir Putin’s address during a meeting today on economic issues via videoconference, with a report by Minister of Economic Development Maxim Reshetnikov. Source: Kremlin