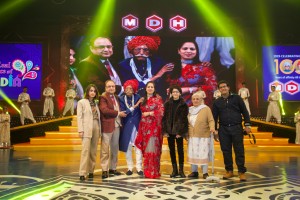 When I heard the news in the morning that the man who added flavour in our food for generations is no more, I was shocked.  It was difficult to believe that Dharampal Gulati, the ‘Masala King’ of India, had died, becoming Covid-19’s one more victim.What more  2020 is going to bring to us!

Although my association with the ‘Masala King’ was as a filmmaker, for me it was much beyond this professional relationship. Being a foodie, food is life to me like many other mortals…And no India food was complete without Dharampal Gulati’s spices. His masala brand – MDH – has been there for generations.  I vividly remember that when MDH completed its 100 years last year, he had  organised celebratory events for three day at three venues — Indira Gandhi Indoor Stadium, Imperial Hotel, and a lavish Banquet Hall in Gurugram.

I and my team had done the filming of these events. During the shoot, there was a lot of close interaction with Gulati. He was fondly called ‘Mahashay Ji‘ by many, and ‘Dada ji‘ by many others. His brand MDH actually was an acronym of his company Mahashian Di Hatti Private Limited.

Even at such an age — he was 96 then, his zeal was electrifying. I found him to be full of life – a royal personality. The way he  dressed up, the way he interacted  with  the people, was amazing.

But what touched me the most was his humbleness. When the MDH presented  the recognition awards to the people, he met most of them personally to congratulate them. He never looked tired even at that age.

As we all know,  his journey had started with a small store in Karol Bagh and  with his hard work he established his own brand of Indian Spices ‘MDH’ not only  in India but also  spread it to the entire world. He is certainly a role model for the public.

Indeed I was highly  impressed with  him not only as a professional but as an individual as well.  For me he was one of the  most inspiring entrepreneur of  the country. I must say that every entrepreneur should be looking like him.

As a film maker I will always cherish  the moments spent with him on his shoot.

A grand salute to the Masala King.

*The writer is an acclaimed filmmaker

1 thought on “Remembering ‘Mahashay ji’ – the Masala King of India”