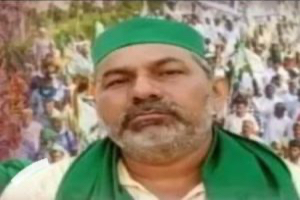 Bengaluru: Farmer leader Rakesh Tikait was taken by surprise when a group of people stormed a press meeting, threw a microphone at him and then dabbed him with ink here today.

Tikait had just begun his press conference when a man casually approached him, yanked the mike in front of the farmer leader and hit him. Soon, more people rushed and ink was splashed on Tikait even as his supporters tried to protect him.

Soon after the incident which took everyone by surprise, the farmer leader’s supporters jumped from the podium and it was free for all as chairs were flung and there were fisticuffs between Tikait’s supporters and those who had stormed the venue.

National spokesperson of Bharatiya Kisan Union (@OfficialBKU) @RakeshTikaitBKU face was smashed with mike & smeared with black ink by youth at Gandhi Bhavan. where Tikait was attending the Press Conference organised by Karnataka Rajya Raitha Sangha on Monday in #Bengaluru. 1/2 pic.twitter.com/vvQCUj153u

The press meet was called by Tikait, a leader of Bharatiya Kisan Union and the face of the farmers’ movement against the now-repealed agricultural laws, to expose a sting operation in which a Karnataka farmer leader was allegedly caught asking for money.

It is alleged that the farmer leader’s supporters attacked Tikait.

Following the incident, Tikait accused the Bharatiya Janata Party government in Karnataka of not providing security at the venue. “We were doing a press conference when some people came and started hitting us with the mics that were present there. It’s Karnataka government and police’s failure. It was a conspiracy and needs to be investigated,” he said.