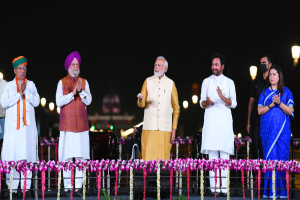 New Delhi: Rajpath – the path of all Republic Day parades in the national capital ever since India became a republic after Independence – became ‘Kartavya Path‘ today, courtesy the Prime Minister, Narendra Modi.

Modi, who inaugurated the ‘Kartavya Path’ today, declared that the change in nomenclature symbolises a shift from the erstwhile Rajpath being an icon of power, to Kartavya Path being an example of public ownership and empowerment. He said, “Kingsway i.e. Rajpath, the symbol of slavery, has become a matter of history from today and has been erased forever. Today a new history has been created in the form of the ‘Kartavya Path’. I congratulate all the countrymen for their freedom from yet another identity of slavery, in this Amrit Kaal of independence.”

The Prime Minister also unveiled the statue of Netaji Subhas Chandra Bose at India Gate on the occasion. Speaking about the huge statue of Bose installed near India Gate, Modi said, “At the time of slavery, there was a statue of the representative of the British Raj. Today the country has also brought to life a modern, strong India by establishing the statue of Netaji at the same place”.

Netaji, the Prime Minister reminded, was proud of India’s heritage and at the same time, he wanted to make India modern. “It is our effort that Netaji’s energy should guide the country today. Netaji’s statue on the ‘Kartavya Path’ will become a medium for that”, he said. The Prime Minister said Bose was the first head of ‘Akhand Bharat’, who freed Andaman before 1947 and hoisted the Tricolor. “At that time he had imagined what it would be like to hoist the Tricolor at the Red Fort. I personally experienced this feeling, when I had the privilege of hoisting the Tricolor at the Red Fort on the occasion of 75 years of the Azad Hind government,” Modi said.

The jet-black granite statue of Netaji Subhas Chandra Bose measures a total of 28 feet and is placed under the Canopy near India Gate. The grand statue has been carved from a monolithic block of granite weighing 280 metric tonnes. After 26,000 man-hours of intense artistic endeavour, the granite monolith was chiselled to produce a statue weighing 65 metric tonnes. The statue is completely hand sculpted using traditional techniques and modern tools. The team of sculptors for executing the statue was led by Arun Yogiraj.

The statue of Netaji Subhas Chandra Bose has been installed in the same place where a hologram statue of Netaji was unveiled earlier this year on Parakram Diwas (January 23, 2022) by the PM to mark the 125th birth anniversary of Netaji.

The towering statue of Netaji is one of the tallest, most realistic, monolithic, handmade sculptures in India. A 100 feet long truck with 140 wheels was specially designed for this monolithic granite stone to travel the 1665 km from Khammam in Telangana to New Delhi.