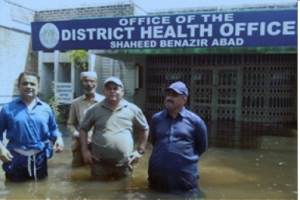 Islamabad/Cairo/Beijing/Washington/New York/New Delhi: The heavy monsoon rains in Pakistan which started in mid-July 2022 are continuing in many parts of the country and according to the Ministry of National Health Services, Regulations and Coordination, over 1100 people have been killed, 1600 injured and more than 1,61000 people have been displaced to relief camps as a result of this natural disaster.

In Washington, the United States State Department Principal Deputy Spokesperson Vedant Patel said more than one million homes were damaged or destroyed and nearly 735,000 livestock – a major source of livelihood and food – were lost, and the flooding has damaged roads and more than two million acres of agricultural land in Pakistan.

In New York, the United Nations Secretary-General António Guterres said the United Nations is issuing a Flash Appeal for $160 million to support the response, led by the Government of Pakistan.  “These funds will provide 5.2 million people with food, water, sanitation, emergency education, protection and health support,” he said.

As districts in Pakistan continue to be affected by massive monsoon rainfall and unprecedented levels of flooding, the World Health Organization (WHO) today warned of significant public health threats facing affected populations, including the risk of further spread of water- and vector-borne diseases such as malaria and dengue fever.

The Government of Pakistan is leading the national response, including declaring a state of emergency in affected areas, establishing control rooms and medical camps at the provincial and district levels, organizing air evacuation operations, and conducting health awareness sessions for people who are now at increased risk of waterborne and vector-borne diseases, as well as other infectious diseases such as COVID-19.

However, ongoing disease outbreaks in the country, including acute watery diarrhoea, dengue fever, malaria, polio, and COVID-19 have further aggravated, particularly in camps where water and sanitation facilities have been damaged. Even before the heavy rainfall and subsequent flooding, Pakistan had reported 4531 measles cases, and 15 cases of wild poliovirus in 2022. The rains and floods have disrupted the nationwide polio vaccination campaign in affected areas.

Health facilities have been severely affected in Pakistan. As on August 28, 2022, at least 888 health facilities were damaged in the country of which 180 of them were completely damaged. Access to health facilities, health care workers, and essential medicines and medical supplies remain the main health challenges for now.

The country’s health system is already battling multiple concurrent health threats including COVID-19, and outbreaks of cholera, typhoid, measles, leishmaniasis and HIV. Even before the current floods, there was a significant disparity in access to health services between rural and urban areas. The current situation will highly likely increase the spread of disease especially if/when response capacities are hindered.

“According to a preliminary assessment conducted by WHO and humanitarian partners, the current level of devastation is much more severe than that caused by floods in Pakistan in previous years, including those that devastated the country in 2010,” said Dr Ahmed Al-Mandhari, WHO’s Regional Director for the Eastern Mediterranean. “WHO has initiated an immediate response to treat the injured, provide life-saving supplies to health facilities, support mobile health teams, and prevent the spread of infectious diseases.”

WHO is working with health authorities to respond quickly and effectively on the ground, Dr Palitha Mahipala, WHO Representative in Pakistan, said. “Our key priorities now are to ensure rapid access to essential health services to the flood-affected population strengthen and expand disease surveillance, outbreak prevention and control, and ensure robust health cluster coordination,” Dr Mahipala added.

With projections that the floods will further worsen over the coming days, with an even greater humanitarian and public health impact, WHO stated its immediate priorities are to rapidly expand access to essential health services to the flood-affected population, strengthen and expand disease surveillance, outbreak prevention and control, and ensure a well-coordinated response at national and subnational levels, including the involvement of all relevant partners.

Working closely with the Ministry of National Health Services, Regulations and Coordination, WHO said it was increasing surveillance for acute watery diarrhoea, cholera, and other communicable diseases to avoid further spread and was also providing essential medicines and medical supplies to functional health facilities treating affected communities. Prior to the flood, WHO and partners had undertaken vaccinations against cholera in response to the pre-existing outbreak.

Pakistan is also one of the two remaining polio-endemic countries in the world, and polio teams in affected areas are expanding surveillance for both polio and other diseases. Polio workers are working closely with national authorities to support relief efforts, particularly in areas worst hit by the floods.

WHO has also diverted mobile medical camps, including those responding to COVID-19 teams, to affected districts, delivered 1 700 000 aqua tabs to ensure access to clean water, and provided sample collection kits to ensure clinical testing of samples to ensure early detection of infectious diseases.

In New York, the United Nations Secretary-General António Guterres said the scale of needs in Pakistan “is rising like the flood waters.  It requires the world’s collective and prioritized attention”. He noted that South Asia was one of the world’s global climate crisis hotspots and people living in these hotspots were 15 times more likely to die from climate impacts.

“As we continue to see more and more extreme weather events around the world, it is outrageous that climate action is being put on the back burner as global emissions of greenhouse gases are still rising, putting all of us — everywhere — in growing danger…Let’s stop sleepwalking towards the destruction of our planet by climate change.  Today, it’s Pakistan.  Tomorrow, it could be your country,” he said.

In New Delhi, Indian Prime Minister Narendra Modi condoled the deaths and injuries due to floods in Pakistan and hoped for an early restoration of normalcy. Chinese President Xi Jinping too sent a message of condolence to Pakistani President Arif Alvi over the severe floods in Pakistan. Chinese Premier Li Keqiang too sent a message of condolence to Pakistani Prime Minister Shehbaz Sharif. China’s air force also “urgently” dispatched Y-20 cargo planes to deliver humanitarian supplies to Pakistan, including 3,000 tents. The shipments reached Karachi Airport on August 30, 2022. Moreover, the United States stated that through USAID, it was providing an additional $30 million in humanitarian assistance to support the people affected by severe flooding in Pakistan resulting from heavy monsoon rains, as well as landslides and glacial lake outbursts, since mid-June.