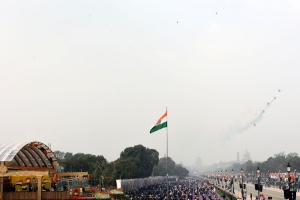 On the occasion of Republic Day, Kolkata-based artist Joydeep Mukherjee performs the Indian National Anthem in rare instruments for the readers of Global Bihari. Out of the three instruments, two are extremely rare and have become extinct unless revived by the artist last year. The instruments used are Surshringer, Radhika Mohanveena and Sarod.

Surshringer
This was an old Dhrupad instrument developed during the late 18th century in the Royal court of Varanasi by Ustad Jaffer Khan (1775-1825), a direct descendant of Miyan Tansen from the son’s side. This instrument was predominantly used for making long alaaps in Dhrupad and soon became a very popular instrument during 19th and early 20th century. However, it became extinct from the 2nd half of the 20th century. In 2021, it was revived by Joydeep Mukherjee with better sound production and tonal quality using modern technology.
Radhika Mohanveena
Developed by Pt. Radhika Mohan Maitra in 1948, this was a very flexible instrument which can be used for making alaaps and gats as well, both for Dhrupad and Khayal style of music. It was a bridge instrument between Surshringer and Sarod and was a mix of three instruments – Surbahar, Sarod and Veena where Rabab aang baaj can also be played along with Dhrupad. It became extinct in 1981 with the demise of Pt. Maitra and was revived by Mukherjee in 2020.
Sarod
A very popular instrument of current times developed from the Afgan Rabab during 19th century. It is extremely useful to play high speed phrases and the sound is very sweet and soothing.
Also read: An insight into the maintenance of rare musical instruments
– global bihari bureau
1
0
Tags: National Anthem Rare Instruments