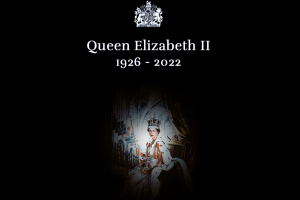 London: Britain’s monarch for over 70 years, Queen Elizabeth Alexandra Mary Windsor (Elizabeth II), passed away today afternoon (GMT) at the age of 96. She was the world’s second-longest reigning monarch who was coronated on February 6, 1952. She was the Supreme Governor of the established Church of England too. With her death, an era comes to an end. Last year on April 9, her husband Prince Philip, the Duke of Edinburgh who was the longest-serving royal consort in history, passed away at the age of 99.

King Louis XIV of France remains to date the world’s longest-serving monarch who ruled France and the Kingdom of Navarre  for 72 years and 110 days from May 14, 1643, to September 1, 1715. (Today, significant parts of the ancient Kingdom of Navarre comprise the Spanish autonomous communities of Navarre, Comunidad Autónoma Vasca and La Rioja and the French community of Pays Basque).

The royal family announced that the queen died peacefully at Balmoral in Scotland today afternoon. Today morning Buckingham Palace stated that the Queen’s doctors were concerned for her health and recommended that she remain under medical supervision. It may be mentioned that in February this year, the queen also tested positive for COVID-19 though the symptoms were minor.

The royal family members including the queen’s son and heir Prince Charles (now King Charles III), his wife Camilla (now Queen Consort) and their son Prince William and his wife Kate Middleton had reportedly reached Balmoral Castle in Scotland where the queen was staying. Prince Harry was reportedly on his way but without his wife Meghan Markle. The royal family tweeted that “the King and the Queen Consort will remain at Balmoral this evening and will return to London tomorrow”.

Charles made a statement describing her mother’s death as a moment of “greatest sadness” to him. (See below). 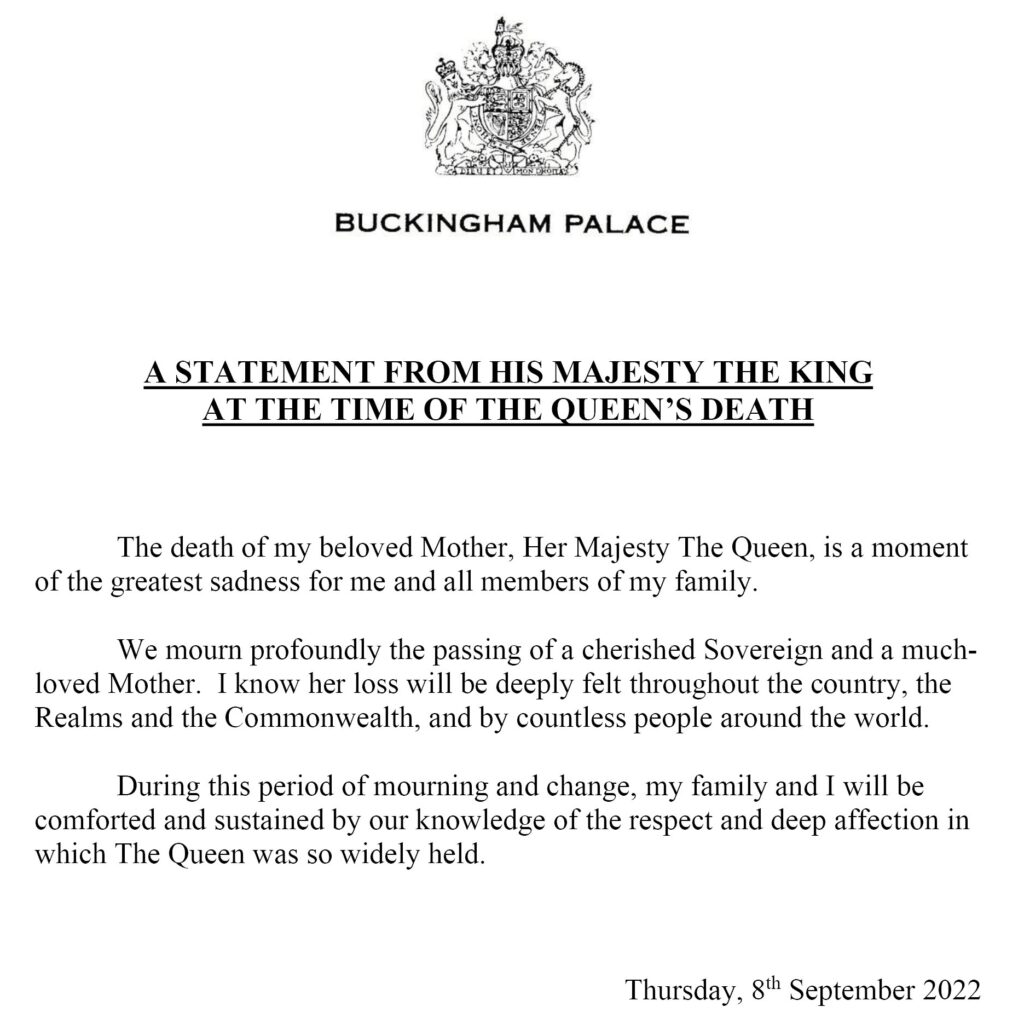 The newly appointed British Prime Minister Elizabeth Truss, popularly known as Liz Truss, tweeted the whole country will be deeply concerned by the news from Buckingham Palace this lunchtime. “My thoughts – and the thoughts of people across our United Kingdom – are with Her Majesty The Queen and her family at this time,” she stated.

Just on Tuesday, September 6, 2022, the queen had had a full day of events, when she formally asked Liz Truss to become Britain’s prime minister. The following day, Wednesday, the queen was advised to rest by her doctors and cancelled a virtual Privy Council meeting.

Elizabeth, who was born in Mayfair, London, was the first child of the Duke and Duchess of York. Her father George VI acceded to the throne in 1936 upon the abdication of his brother, King Edward VIII, making Elizabeth the heir presumptive. George VI who ruled the United Kingdom till 1952, was the last British emperor of India.

Indian Prime Minister Narendra Modi, in a series of tweets, described the queen as “a stalwart of our times”.  He said she personified dignity and decency in public life. “Pained by her demise. My thoughts are with her family and people of UK in this sad hour,” Modi said and recalled his “memorable” meetings with her during his UK visits in 2015 and 2018. “I will never forget her warmth and kindness. During one of the meetings she showed me the handkerchief Mahatma Gandhi gifted her on her wedding. I will always cherish that gesture,” he said.

The President of the United States, Joe Biden, in a proclamation on the death of Queen Elizabeth II, stated that she was more than a monarch and defined an era.

“In a world of constant change, she was a steadying presence and a source of comfort and pride for generations of Britons, including many who have never known their country without her.  Queen Elizabeth II led always with grace, an unwavering commitment to duty, and the incomparable power of her example,” Biden stated. Describing her as a stateswoman of unmatched dignity and constancy who deepened the bedrock alliance between the United Kingdom and the United States, he said the seven decades of her history-making reign bore witness to an age of unprecedented human advancement and the forward march of human dignity.  “Her legacy will loom large in the pages of British history, and in the story of our world,” Biden said.

As a mark of respect for the memory of Queen Elizabeth II, Biden ordered that the flag of the United States shall be flown at half-staff at the White House and upon all public buildings and grounds, at all military posts and naval stations, and on all naval vessels of the Federal Government in the District of Columbia and throughout the United States and its Territories and possessions until sunset, on the day of interment.  “I also direct that the flag shall be flown at half-staff for the same length of time at all United States embassies, legations, consular offices, and other facilities abroad, including all military facilities and naval vessels and stations,” he said.

Besides the United Kingdom, Elizabeth II was also the queen of 14 other Commonwealth realms from February 6, 1952, until her death on September 8, 2022. These Commonwealth realms are Antigua and Barbuda, Australia, The Bahamas, Belize, Canada, Grenada, Jamaica, New Zealand, Papua New Guinea, Saint Kitts and Nevis, Saint Lucia, Saint Vincent and the Grenadines, Solomon Islands, and Tuvalu.

However she wielded her influence far and wide. As Queen, she visited more than 120 countries.

Canada’s Prime Minister Justin Trudeau issued a statement after learning of the passing of  “Canada’s longest-reigning Sovereign, Her Majesty Queen Elizabeth II”.  He stated that for most Canadians, “we have known no other Sovereign”. Queen Elizabeth II, over the course of 70 years and twenty-three Royal Tours, “saw this country from coast to coast to coast and was there for our major, historical milestones”, he stated.

Australian Prime Minister Anthony Albanese in his tribute to the queen recalled that from her famous first trip to Australia, the only reigning sovereign to ever visit, it was clear Her Majesty held a special place in her heart for Australia.

“Fifteen more tours before cheering crowds in every part of our country confirmed the special place she held in ours. As monarch for more than half the life of our Federation, the relationship between Australia and Britain matured and evolved throughout Her Majesty’s reign. The Queen greeted each and every change with understanding, good grace and an abiding faith in the Australian people’s good judgment,” he stated.