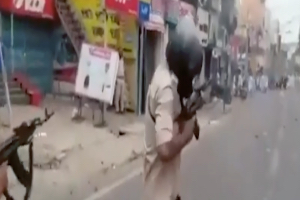 (Above) A cart set into fire in by rioters in Ranchi today. (Top)Police trying to control the rampaging mob in Ranchi.

On the eastern front, the state of Jharkhand, in its capital city Ranchi, witnessed violent mobs indulging in stone-throwing. It caused severe injuries to many police personnel and the combat took a long time to subside, with the police finally resorting to firing in the air before the crowds dispersed. A curfew was imposed in parts of the city.

Protest marches from other parts of the country included Srinagar in Kashmir, Ludhiana in Punjab, Ahmedabad in Gujarat, elite Park Circus and Howrah stretch in Kolkata, besides Mumbai’s satellite township Navi Mumbai in Maharashtra. The protests in these areas reportedly centred on sloganeering and staging protest marches.  Hyderabad’s iconic Charminar area too witnessed protests.

Early reports coming from Delhi’s Jama Masjid area reported peaceful sloganeering and display of placards outside the mosque premises where a huge crowd of protestors had assembled. After their customary Friday prayers, the crowd assembled outside sought strict penal action against those responsible for such offensive remarks from the city police. The local police managed to disperse the peaceful demonstration after quickly taking control of the situation, eye-witness accounts narrated. In another section of the city, Jama Milia university students also held a protest demonstration, demanding the arrest of the offenders in question.

In the neighbouring Uttar Pradesh however, there were reports of violence post the assembly for Friday prayers in the city of Prayagraj. Violent incidents of stone-throwing and hurling of brickbats caused injury to many including those from the Rapid Action Force (RAF) and other security personnel who were quickly deployed at the site to quell the situation. The rioting took a serious turn with some of the vehicles belonging to the security personnel being torched by miscreants.

Police and RAF personnel resorted to lathi-charge besides using tear gas shells and water cannons to bring the violence under control.  Uttar Pradesh’s Saharanpur, where in Deoband one of the largest Islamic institutions of India, Darul Uloom, an Islamic seminary, is located, too faced violent eruptions post the assembly for Friday prayers. The police quickly rounded up and arrested 21 persons from the site bringing the situation under control.

The campus area in the township too witnessed incidences of violence outside the Majida Islamia college premises. Before police action could quell the protesting mob action, shops in the locality were forced to down shutters and many two-wheelers were overturned by the protestors. Reports of violent protests poured in from the state’s Moradabad locality, in addition.

While the ruling BJP dispensation at the Centre and the government has sought to distance themselves from the objectionable remarks and also cited penal action taken against the offenders in the Party as proof of their stand, Indian envoys are on an overdrive in the gulf countries, on their damage control mode.