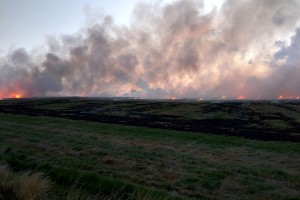 New Delhi: The incidence of stubble burning has reduced by more than 50% in last two years and the number of Good Air Quality Index days have gone up, the Ministry of Environment, Forest and Climate Change, stated here today. However,  crop burning incidents in neighboring states of Punjab, Haryana and Uttar Pradesh were still high last year.The Ministry referred to a high-level task force led by Dr. P. K. Mishra Principal Secretary to the Prime Minister, which has been constituted to improve the air quality in National Capital Region of Delhi. Mishra, in course of a meeting to review action taken by agencies here on September 18, issued a number of directions to intensify the planned actions to ensure that stubble burning is discontinued.

“The efforts and plan made by the State of Punjab, Haryana and Uttar Pradesh for control of crop residue burning were examined in detail, including ground level deployment and availability of machinery for in-situ management of crop residue,” the Ministry informed, adding that the Principal Secretary impressed on all members that the objective of holding meeting early before the onset of harvesting and winter season was to ensure timely action on stubble burning and other interventions.

It was observed that after recent inclusion of residue based power /fuel plants under priority sector lending by Reserve Bank of India, both State and Central Governments should jointly work out action plans for rapid deployment of such units.  Measures related to diversification of crop and strengthening of supply chains were also discussed. Mshra, in the said meeting, highlighted the importance of effective implementation of the existing in-situ management of crop residue scheme of Ministry of Agriculture by the States, and emphasized that State Governments should ensure that the new machinery to be deployed in the current year should reach the farmers before the start of the harvesting season. Ministry of Agriculture was directed to provide all necessary support in this regard.

Chief Secretaries of Delhi, Punjab, Haryana, Rajasthan and Uttar Pradesh, Secretaries of different department/ministries of the central government including Ministries of Environment, Forest & Climate Change, Agriculture, Road, Petroleum and Central Pollution Control Board were present in the meeting.

The Delhi Government was further requested to ensure measures to control local sources of pollution. Principal Secretary mentioned that special emphasis should be laid on deployment of teams for control of open burning of waste, IT-enabled monitoring of mechanical road sweepers, improvement in utilization of construction & demolition waste and site specific implementation of action plan for identified hot spots. It was decided that Haryana and Uttar Pradesh would prepare and implement similar site specific action plans in their area falling under NCR.

Mishra emphasized that the envisaged measures should be implemented well before the onset of severe conditions, and focus should also be laid on compliance of emission norms by industry in satellite industrial area.