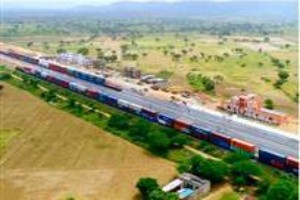 The 306 km Rewari –  Madar section falls in Haryana (for approx. 79 Km in Mahendragarh & Rewari districts) and Rajasthan (for approx. 227 Km in Jaipur, Ajmer, Sikar, Nagaur and Alwar districts). The total value of contracts including civil, electrical and S & T was Rs. 5800 crore in this section excluding land. The opening of this stretch is expected to benefit various industries in Rewari – Manesar, Narnaul, Phulera and Kishangarh areas of Rajasthan, Haryana and National Capital Region. In addition to this, the container depot of CONCOR at Kathuwas will also come on the DFC map and get advantage in terms of faster throughput. Moreover, the ports of Gujarat like Kandla, Pipavav, Mundhra, Dahejetc will have an uninterrupted connectivity to the Northern parts of India. With the dedication to the Nation of the 351-km Bhaupur-Khurja section, and construction of connecting link between Khurja – Boraki-Dadri- Rewari, seamless movement between WDFC & EDFC can ensue.

Modi said with the flag off of the world’s first double stack long haul 1.5 Km long container freight train hauled by electric traction from New Ateli in Haryana to New Kishanganj in Rajasthan, India had joined the select nations in the world. The Prime Minister said the western freight corridor will make farming and allied business in Haryana and Rajasthan easier and also impart new energy into cities like Mahendragarh, Jaipur, Ajmer and Sikar.

“Faster access to national and international markets have opened for the manufacturing units and entrepreneurs of these states at a much lower cost. Faster and cheaper connectivity to the ports of Gujarat and Maharashtra will boost new investment opportunities in the region,” he said. He added that the dedicated freight corridor will bring new opportunities and new hopes for everyone especially farmers, entrepreneurs and merchants of Rajasthan.

Modi stressed that the corridor not only creates employment in the construction sector but also in other sectors like cement, steel and transport. Elaborating upon the benefit of the Dedicated Freight Corridor, the Prime Minister said, it will cover 133 railway stations in 9 states. At these stations, there will be multi model logistic parks, freight terminal, container depot, container terminal, parcel hub. “All these will benefit the farmers, small industries cottage industries and larger manufacturers as well,” he said.

It may be mentioned that Dedicated Freight Corridor Corporation of India is constructing the Western DFC (1506 Route km) and Eastern DFC (1875 route km including Sonnagar-Dankuni PPP Section). The EDFC starting from Sahnewal near Ludhiana (Punjab) will pass through the states of Punjab, Haryana, Uttar Pradesh, Bihar and Jharkhand to terminate at Dankuni in West Bengal. The Western Corridor connecting Dadri in Uttar Pradesh to Jawaharlal Nehru Port (JNPT) in Mumbai will traverse through the states of UP, Haryana, Rajasthan, Gujarat and Maharashtra of WDFC.