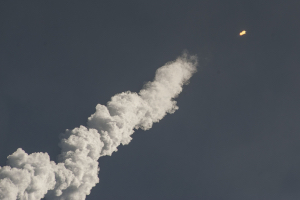 She pointed out that China’s competent authorities issued safety alerts and travel warnings in advance. Yesterday the Chinese People’s Liberation Army announced imminent live-fire military drills and warned aircraft and vessels from other countries not to enter designated airspace and waters.

Chunying claimed the host of measures that China was taking and will take were “necessary, timely countermeasures that are defensive in nature which have gone through serious consideration and careful assessment, and they’re aimed at protecting our nation’s sovereignty and security”. She further claimed that they were consistent with international law and domestic laws. “They are a warning to the provocateurs and also aimed at protecting regional stability and peace in the Taiwan strait,” she said.

In response to the concerns raised by ASEAN foreign ministers in Pnom Penh, against provocative action in the Taiwan Strait, Chunying stated: “The root cause of the current tensions in the Taiwan Strait is the serious joint provocation of the US side and “Taiwan independence” separatist forces, which seriously violates the one-China principle and infringes upon our sovereignty and territorial integrity. In the face of such flagrant provocation, we are compelled to take justified, necessary countermeasures to uphold our sovereignty and territorial integrity. All our measures are targeted against the “Taiwan independence” separatist forces. Anyone who is concerned about regional tensions should be asking the US to immediately and credibly follow the one-China principle, stop violating China’s sovereignty and take real actions to uphold regional peace and stability. It is very clear here who is responsible for the incident and who is the provocateur. China is only being compelled to act in self-defence.”

“The Ministry also calls on countries around the globe to continue to speak up in support of democratic Taiwan in order to jointly safeguard the values of freedom and democracy, to maintain the rules-based international order, and to ensure a free and open Indo-Pacific,” MOFA stated.

Earlier, Taiwan declared Pelosi’s visit as “fruitful” and stated that at a time when regional and global developments are changing rapidly, the visit of Pelosi along with a number of prominent members of Congress to Taiwan for an official visit, demonstrated strong US support of Taiwan through concrete action.

“Taiwan and the United States enjoy close and friendly relations. Taiwan will continue to work side by side with the US administration and friends in Congress to further deepen our close partnership in such areas as security, the economy, and trade,” MOFA stated.

On the second day of their visit yesterday, Taiwan’s President Tsai Ing-wen conferred the Order of Propitious Clouds with Special Grand Cordon on Pelosi, and also hosted a luncheon in honour of the Speaker and the delegation.

During her interaction with Pelosi, Ing-wen highlighted Taiwan’s “key principles” in facing uncertainties and said Taiwan will not back down despite facing “continued, deliberately heightened” military threats. “We will firmly uphold our nation’s sovereignty and continue to hold the line of defence for democracy. At the same time, we wish to cooperate and work in unity with all democracies around the world to jointly safeguard democratic values,” she said.  He also affirmed that she will work to strengthen Taiwan’s self-defence capabilities. “Taiwan is committed to maintaining peace and stability in the Taiwan Strait, and we will make Taiwan a key stabilizing force for regional security, ensuring a free and open Indo-Pacific as well as the stable development of global trade and supply chains,” she said.

Ing-wen said Taiwan was a reliable and trustworthy partner of the United States, and it will continue to work with the US Congress, as well as the administration, to strengthen cooperation in areas such as Indo-Pacific security, economic development, talent cultivation, and supply chains, so as to further elevate Taiwan-US relations.

The US delegation departed from Taipei yesterday afternoon (local time) on a US government plane. On behalf of the government of the Republic of China (Taiwan), Minister of Foreign Affairs Jaushieh Joseph Wu bade farewell to the delegation at the airport.