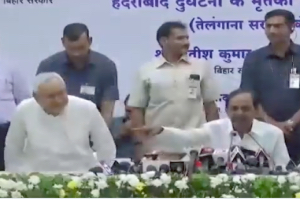 When the dilemma of the Opposition oscillates between ‘baithiye-chaliye‘!

In response to Modi’s clarion call of ‘Congress Mukt Bharat‘, Telangana Chief Minister and Telugu Rashtra Samiti supremo Kalvakuntla Chandrashekhar Rao gave a counter slogan of ‘BJP Mukt Bharat‘, in order to take the fight back to the Bharatiya Janata Party in Delhi and different states.

However, even KCR (the acronym of Kalvakuntla Chandrashekhar Rao) knows well that his slogan appears more as ‘ a jittery response’, rather than a well-calibrated move to lock horns with a formidable rival. Unequivocally, Rao, a seasoned politician knows about his inherent limitation; his party’s political reach remains confined within Telangana. Small wonder then, his political rhetoric apparently has no purported implication unless it is backed up by some tangible measure on the surface.

KCR, a smart politician that he is, in order to prove the political weightage and implication of his statement, would go for political manoeuvring within his capacity to prove that he definitely means what he says. Hence, if the BJP could conduct its two days National Executive Committee Meeting on July 2-3, 2022, in Hyderabad, KCR as a challenger to Modi, too, wanted to prove that he could take the battle back to the state where BJP had just lost power –Bihar, where Nitish Kumar jettisoning the BJP, has gone for realignment with Laloo Yadav’s Rashtriya Janata Dal (RJD).

Thus in a tit-for-tat move, KCR landed at the door of Nitish Kumar in Patna on August 31, 2022, for a strategic dialogue which could form a template for the unity among the Opposition to defeat the BJP in the upcoming General Election of 2024.

But then the moot question which arises here is this: Who will be the face of the Opposition to take on Narendra Modi in 2024?

Significantly, the most inherent contradiction which tears the Opposition apart is this: several claimants to the leadership post, would mean that all strategies against Modi would fall apart like a ninepin. Unequivocally, all the crucial discussions and deliberations will be tested when the moot question of leadership crops up.

Paradoxically, as KCR and Nitish Kumar gear up to stick together a disparate Opposition into a unified unit, West Bengal Chief Minister and Trinamool Congress supremo Mamata Banerjee is increasingly getting alienated in the process. For instance, Mamata\’s latest comment, praising the Rashtriya Swayamsevak Sangh (RSS) leadership, is the vindication of the move that she might not be comfortable working under any other combination where her claim of leadership is not wholeheartedly accepted. With the CBI and the ED snarling at her throat, especially in the context of the summon sent to TMC MP Abhishek Banerjee to appear before the CBI in the coal scam. Small wonder then, Mamata’s immediate concern is to get the monkey off her shoulder. The Aam Aadmi Party chief and Delhi CM Arvind Kejriwal too is facing the heat, as the noose appears to be tightening around the neck of his close confidante and Delhi’s deputy CM Manish Sisodia. However, while his party is fighting an election in Gujarat, especially in the wake of a euphoric victory in Punjab, Kejriwal does look upon himself as the potential face of Opposition to take on Modi.

With a plethora of leaders seeking their respective claim over leadership, not only does KCR’s dream of achieving a ‘BJP Mukt Bharat’ appears a challenge, his very move to bring the Opposition together is also fraught with many hiccups.

Significantly nothing proves this futility of exercise than an apparent faux pas which crystallised in the press conference of both the leaders, Nitish Kumar and KCR on August 31, 2022, in Patna.

It so happened that, in the wake of an hour’s press interaction, finally when a reporter asked KCR as to who will be the Opposition face to take on Narendra Modi, Nitish Kumar promptly stood up, asking KCR ‘Chaliye‘, while KCR, in no mood to conclude, instead asked Nitish, ‘Baithiye‘.

#KCR has no credibility in Telangana. Nitish Kumar shows him his true place, not once but repeatedly. Even the security guards get up, indicating that his time is over. But KCR thinks he is in Pragati Bhavan, #Hyderabad where journalists are scared to ask him questions. pic.twitter.com/cqapwhf8fK

*Vivekanand Jha is an author, academician and public intellectual. The views expressed are personal.

1 thought on “Paradox between ‘Baithiye-Chaliye’ hobbles the Opposition unity”