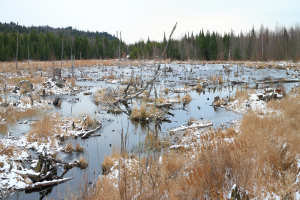 Our planet on fire – Part 9

Wildfires in the Arctic have captured media attention in recent years as fire has become increasingly common in ecosystems that many do not think of as “fire-prone”. However, evidence from the modern and palaeontological records indicates that northern boreal, tundra, and peatland systems burn under the right conditions. Tundra fires have occurred in the paleo record and historical past and tundra systems may burn frequently under the right conditions. Boreal forests are known from the paleo record to be flammable, but recent trends exceed rates of burning during the Little Ice Age and even warmer times of the Holocene.

Decreased summer precipitation and increased summer temperatures increase the likelihood of years with high fire activity in the tundra and high latitude boreal forests, and increased natural lightning ignitions have contributed to recent increases in the area burnt by fire in the Canadian Arctic. In contrast, economic development and related increased ignitions appear to be an important driver of the increasing area burnt in parts of northwest Siberia. Analysis of these events strongly suggests climatic conditions govern the availability and flammability of fuels, and thus climate change can be expected to change Arctic fire regimes.

Future climate changes are projected to become rapidly warmer and wetter on average, but inter-annual and regional variability, longer warm seasons, and the increased evapotranspiration associated with higher temperatures are likely to contribute to higher fire frequency and area burnt via direct effects on fuel flammability and availability. As extreme Arctic temperatures increase past historical thresholds, fire activity can be expected to increase, potentially very rapidly. As an example, in 2020, fires in the north-central Russian Arctic burnt tens of millions of hectares. The late winter/early spring and summer temperature anomalies in the region of these fires were 4–6°C above normal (1979–2000) and precipitation anomalies were below normal. While wind may have also been a contributing and related factor, these conditions indicate clear and ongoing regional changes for Alaska. The 2020 fire season caps a string of abnormally large high latitude fire years since the early 2000s, including but not limited to 2019 (Alaska, Russia), 2018 (Fennoscandia, Russia), 2017 (Greenland), 2016 (Canada), 2015 (Alaska) and 2014 (Canada).

In recent years, the prevalence of latent winter fires (also called ghost or zombie fires because they can burn underground in peat soils undetected and emerge somewhere else weeks or even months later) in Arctic ecosystems has been well-documented. As these fires have the potential to keep burning, they can flare up into wildfires when conditions are favourable.

Arctic wildfires have immediate to near-term impacts, including on local and regional air quality, carbon flux, and vegetation changes or shifts, but the long-term effects on the cryosphere and ecosystems in a warming climate are complex. Air pollution from wildfires includes smoke, fine particulate matter (PM2.5) and black carbon, or soot which can be transported long distances. These air quality problems have affected rural communities of the Arctic in recent fire seasons and will likely increase under climate change, but comprehensive regional analyses are lacking at this time. The increased deposition of black carbon on ice sheets and sea ice in summer and autumn could also potentially hasten melt as a result of increased heat absorption.

Vegetation shifts in Arctic systems are implicated in increases in fire severity or frequency. These increases, combined with climatic changes, can cause persistent energy balance changes that accelerate permafrost thaw. Interactions among fire, permafrost thaw, and carbon fluxes may increase the rate at which peatlands transition from carbon sink to carbon source. Feedback among temperature change, fire, permafrost thaw and atmospheric CO2 in Arctic systems, therefore, has the potential to amplify regional changes to global impacts.

Taken as a whole, the current and projected changes in Arctic climate, ecosystems, fire regions and socio-ecological systems suggest a future in which management of fire and adaptation to its impacts look fundamentally different than they did in the historical past. The immense and sometimes inaccessible areas are sparsely populated but are home to Indigenous peoples with strong cultural ties to the landscape and resources of the Arctic. Recent extreme fire years in all Arctic regions underscore the need for understanding the likely future impacts on the whole system, as well as the diversity of vulnerabilities, impacts and adaptive capacity across the Arctic.