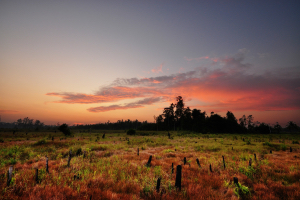 Wildfires in the degraded peatlands of Kalimantan, Borneo

Although fires have historically occurred in the peat swamp forests of Kalimantan, since the late twentieth century these fires have increasingly become an annual occurrence, largely due to changes in land cover and shifts in rainfall. Local communities have sustainably used the peat swamp forest for centuries but providing food for Indonesia’s growing population has driven land-use change in the region.

In the past, major wildfires in tropical peatlands have been relatively rare, but recent events in Southeast Asia suggest that peatlands have become increasingly vulnerable to fire due to the expansion of clearcutting and large-scale draining.

Between 1996 and 1998, large areas of Central Kalimantan were cleared of forests and drained through an extensive system of canals for the Mega Rice Project. Assisted by the severe drought conditions of the 1997– 1998 El Niño, fires lit to clear the land escaped. Owing to a lack of resources to fight the fires and the remoteness of the area, the fires continued to burn for months. The smoke plume that formed stretched into the Indian Ocean affecting numerous countries. It is estimated that more than 20 per cent of the peat swamp forest of Central Kalimantan was destroyed in 1997. The area contained globally important biodiversity hotspots and the peat swamp forest held a significant store of carbon.

Although the Mega Rice Project quickly failed, it left a legacy of increased surface run-off, reduced water retention across peatlands and a lowered groundwater table in the neighbouring areas. As a result, the cleared areas of the project dry out during the dry season and significantly increase the risk of wildfires in the region. Currently, 62 per cent of Central Kalimantan is subject to high fire vulnerability, with roughly another 10 per cent of the area having a very high vulnerability. Indonesia has committed to restoring peatlands and ending practices that contribute to wildfire vulnerability.