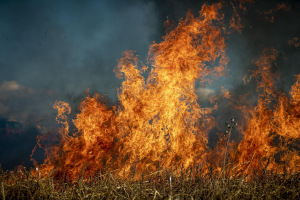 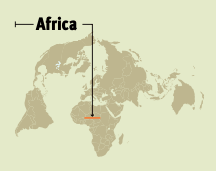 Human activity is considered the primary source of ignitions in the tropical forests, savanna, and agricultural regions of Africa. Fire activity in Africa’s grasslands and savannas has, however, declined by 25 per cent over the last two decades. Typically, small to intermediate and less intense land-use fires dominate the African landscape. Humans have been managing fire for millennia, and fire remains integral to savanna and grassland ecology.

In sub-Saharan Africa, the grassy-savanna biomes dry out annually and provide the fuel for fires. Wildfires will occur almost anywhere there is enough biomass (i.e., fuel) to sustain connectivity and will vary in relation to productivity (i.e., rainfall) and the season. African savannas and the variability and interactions between rainfall, humans and fire enables the turnover in grass biomass and the coexistence of trees and grass cover.

In large parts of Africa where there is less than 800 mm of rainfall annually, increased temperatures and drought result in less burnt area due to a decline in grass biomass and productivity. Therefore, not all ecosystems burn more when exposed to drought and high temperatures. In these arid regions of Africa, it is actually periods of increased rainfall that lead to higher fire activity due to greater accumulated biomass. Furthermore, attempts to suppress fire can lead to biomass accrual and more severe fires. The pattern observed today of increased fire during wetter periods is also found in charcoal records. Future changes in rainfall for Africa are uncertain, and global projections for rainfall and fire frequency will change due to increasing CO2 and climate change. The effects of climate change on wildfires will therefore depend on the interaction between ignition conditions, fuel biomass accumulation, rainfall seasonality, and human management of fires.

Although the total area burnt and fire emissions decrease with drought in Africa’s grassy ecosystems, extreme wildfire events do occur in African ecosystems and are associated with anomalous climate extremes, such as heatwave days and high-fire danger days that are projected to increase in frequency with global warming. Moreover, there is evidence that during these extreme conditions, forests – which are usually resistant to fire–can burn. This is exacerbated by the presence of alien vegetation that burns more intensely than indigenous vegetation. For example, in South Africa, one of the most damaging wildfire events on record occurred in the Knysna region of the Western Cape in 2017. It claimed 800 buildings, 5,000 hectares of forest plantations, and the lives of seven people. The severity of the fires was intensified by an unprecedented drought, the conversion of natural fynbos shrublands to timber plantations, and the invasion of alien trees, in combination with a history of fire suppression which resulted in fuel build-up. The management of invasive alien vegetation is crucial for the prevention of extreme wildfire events.

African savanna fires are fuelled by grass. However, the savanna biome is experiencing a rapid increase in woody plants. Woody encroachment is now widespread throughout sub-Saharan African savannas, as well as other parts of the world. With an increase in global CO2, tropical and subtropical savannas and grasslands are predicted to shift towards woody vegetation and associated changes in fire regimes (e.g., reduced area burnt). Therefore, both forest expansion and savanna thickening present significant challenges for the long-term management of protected areas in Africa. Feedback between vegetation structure (dense woody stands of trees versus grass-laden savannas) and rainfall and burnt area are important interactions with management implications. Frequent early-season management burns are important in maintaining an open canopy and preventing intense dry season burns, whereas infrequent, intense fires are important for managing woody encroachment or bush thickening in savannas.

Although communities have a limited ability to control global factors, they can manipulate fire and use this process to manage ecosystem services, including biodiversity, grazing, veld foods, and nature tourism potential. For example, the deliberate use of early dry season fires (April to July) by local communities has been shown to reduce and prevent the spread of the late hot dry season fires in West African savannas and in north-eastern Namibia’s savanna-woodlands.