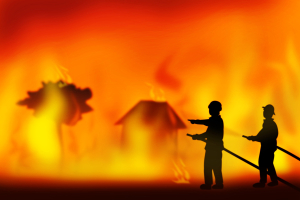 When we experience extreme or unusual weather events, the question frequently asked is, “was climate change the leading cause?” There is often no definitive answer to this question. The drying conditions in China’s tropical and warm temperate forests are compounded by increased fuel continuity because of cropland cover retreat. Some of the large-scale wildfire events that have made the headlines in recent years occurred in areas that typically experience much less burning. There have also been wildfire events in normally fire-prone ecosystems at a much higher intensity or over larger areas than expected (for example, Australia in 2019–2020 and California in 2020).

Moreover, some areas of the planet have experienced accelerated warming with an increase of 1.59°C over land and, for example, temperatures in the Arctic rising more than twice as fast as the global average.

Since industrialisation (1850–1900), the Earth has experienced a long-term warming trend, with an estimated increase in the global mean surface temperature of 1.09°C.

Accelerated warming in the Arctic is extending growing season length and vegetation productivity, as well as thawing permafrost, thereby increasing fuel flammability. Some of the largest percentage increases in fire occurrence are found in the Arctic.

The Arctic contains nearly half of the world’s peatlands, which are one of the world’s largest sources of terrestrial carbon. The Arctic has approximately 80 per cent of the global peatland carbon and nitrogen stocks. Positive feedback, known as arctic amplification, causes the Arctic to warm more rapidly than the rest of the world. This leads to accelerated thawing of permafrost and melting glaciers. The thawing of permafrost peatlands makes them susceptible to fire, which can turn these historical carbon sinks into a net source of carbon in the atmosphere, further accelerating climate change.

In 2020, Arctic fires were responsible for releasing 0.244 Gt CO2 into the atmosphere – 35 per cent more than the previous year, which also set records (Witze 2020). The additional warming and thawing of permafrost peatlands due to wildfires can speed up the development of hazardous landscape features such as sinkholes and thermokarst bogs,2 adversely impacting Arctic communities.

With attribution studies, we can investigate how an event’s likelihood has changed due to climate change by using models to compare the real world to a hypothetical world without anthropogenic emissions and associated warming.

Several studies have used this method to attribute unusual fire events to natural or anthropogenic causes. Kirchmeier- Young et al. (2017), for example, assessed the record fire season in Canada in 2017, where 1.2 million hectares of land in British Columbia burnt, and concluded that climate change increased the area burnt by a factor of 7–11. The extreme weather conditions that were potentially a leading cause of the fire season in 2019–2020 in Australia have been shown to be 30 per cent more likely to have occurred because of climate change (van Oldenborgh et al. 2020). Several attribution studies have focused on fire in the western USA. They concluded that as a result of climate change, the number of autumn days with weather suitable for wildfires has doubled since the 1980s and that fire extent has increased fivefold since the 1970s, also very likely due to human-induced warming and the resultant drying of fuels. The 2020 Siberian heatwave that was associated with extensive burning in the Arctic Circle was the first event shown to be almost impossible without climate change, with the likelihood of this happening being only once in 80,000 years without anthropogenic emissions, and climate change increasing the chances of prolonged heat by a factor of at least 600.

Conversely, by looking at the fuel and moisture drivers at the land surface, the researchers found very little meteorological influence for the 2019 Amazonian deforestation fires, suggesting that landscape modification or human fire ignitions were the main drivers. Research also showed that even though 2015 had the most severe drought ever recorded in Amazonia, the total number of remotely-sensed active fire counts were 21 and 50 per cent lower than those reported for the extreme droughts of 2010 and 2005, respectively.

Amazon forests contain nearly half of the world’s tropical forest carbon stocks. Although natural fires are extremely rare in the Amazon, a combination of deforestation, changing land-use practices and droughts have made this ecosystem susceptible to wildfire. Over the past two decades, droughts and heatwaves have become more frequent and severe. These hot and dry periods increase tree mortality and vulnerability to fire. Deforestation fragments the forest, which also has an impact on the increase in fire incidence at the forest edges and patches. Ninety-five per cent of active fires and the most intense fires are found within 1 km of the forest edge.

Burnt forests have been found to contain almost 60 per cent less aboveground carbon than undisturbed forests. Recovery is slow, with significantly lower biomass levels than unburnt forests still observable decades after burning (e.g., 25 per cent less biomass has been recorded 31 years after burning; Silva et al. 2018). This lower biomass results from canopy destruction and high tree mortality, which is not compensated for by the growth of the surviving trees or new trees. With more frequent droughts predicted, an increase in wildfires can be expected (Figure 2.8), along with a corresponding increase in burnt fallen and standing trees. Reducing carbon storage in the Amazon may create significant positive climate feedback that will further increase warming trends. In the Brazilian Amazon, fire emissions during extreme drought years can be higher than deforestation emissions. Forest fires alone currently contribute to mean annual emissions of 0.454 ± 0.496 Gt CO2 year−1 (2003–2015) or 31 ± 21 per cent of the estimated emissions from deforestation (Aragão et al. 2018).

Warming has increased the frequency and magnitude of extreme weather conditions

Warming has increased the frequency and magnitude of extreme weather conditions that drive the occurrence and spread of wildfires and has caused vegetation that would not usually burn to dry out and combust (e.g., rainforests, permafrost, and peat swamps). A review of 116 articles written since 2013 on climate change and fire concluded that there is a strong consensus that climate change is increasing the likelihood of fire occurrence in many regions.

Forecasting fire outbreaks is uncertain. As a result, projecting specific future changes in burning can be extremely imprecise even in regions where modelled climate-fire relationships are strong.