Bihar heading to another political uncertainty?

Nitish Kumar is apparently yet again on the same old tactics to retain power through political callisthenics: by shunning the Bharatiya Janata Party and possibly striking a fresh alliance with Laloo Yadav. As the news has filtered in, Nitish Kumar has reportedly spoken to Sonia Gandhi to prevail over Laloo Yadav’s prescribed pre-condition that only his son should become the chief minister in the new political permutation and combination if it at all takes tangible shape.

For the time being, Nitish today reportedly told Deputy Chief Minister Tarkishore Prasad of the BJP today that “There’s nothing serious”.  This contradicts his senior minister and close confidante Vijay Choudhary, who stated, “We will take a decision tomorrow after all our leaders review the situation”.

Now, the moot question: Does an individual have the right to override the verdict of the people depending upon his own political expediency? Significantly, the question which should definitely trouble our conscience is this: how an all-powerful individual, equipped with the victory at the hustings, goes on working out one after another permutation and combination depending upon his own political convenience: how Nitish won the assembly elections in 2020 in alliance with BJP, yet as his political expediency dictates, he has no compunction in dumping the BJP in no time. 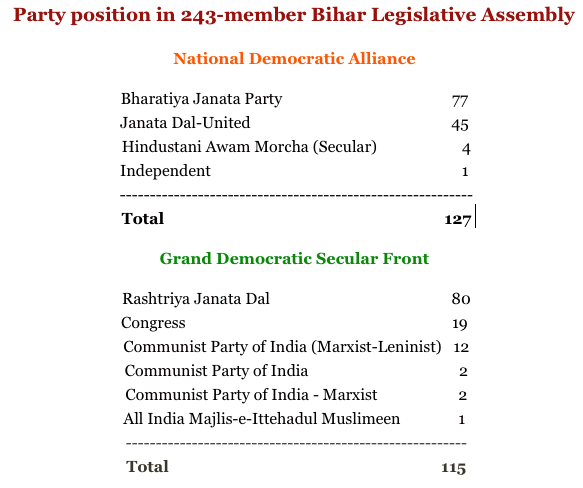 Apt it is here to mention the important incident that Nitish Kumar, a master in political opportunism, played the same game in 2017: he had abandoned the ship of Laloo and joined the BJP’s bandwagon. But then the bigger question is, did our Constitutional forefathers ever envisage how their elaborate Constitution-making exercise would end up as a casualty to the skilful manipulators, who will have the wherewithal to manipulate the Constitutional loopholes to the best of their mandates?

Unequivocally, making the mockery of the fastidious piece of brainstorming by the intellectual elites of that time, the politicians of today have become Constitution unto themselves, is the latest monster which needs to be nipped in bud.

A Journey from Rajneeti to Lokneeti, a book, which, unfortunately though, has met the cul-de-sac, sought to evaluate the dilemma which confronted our Constitutional democracy in contemporary times. Small wonder then, after reflecting on this anomaly, we reached a vital solution: If the party or coalition, which develops the snags in governance or hits the cul-de-sac, should not leverage the other permutation and combination for forming another government.

Significantly, the party or coalition failing to govern should pave the way for the next alternative. For instance, in 2017, the failure of Nitish and Laloo, to work in tandem with each other, should have automatically resulted in the BJP filling the gap, not in collaboration with the Janata Dal-United (JD-U), but by virtue of its own strength. If it failed to do so, a fresh election should have been inevitable. This, alone, could have provided the alternative option to plug the loopholes which, over time, have come to be the toys in the hands of politicians to exploit the public mandate the way they feel is right for them.

It is this plugging of Constitutional loopholes which assumes paramount importance in today’s context. See how Uddhav Thackeray, despite winning the mandate in the alliance with the BJP, went with Sharad Pawar’s Nationalist Congress Party and the Congress Party. And later, the BJP, exploiting the same loopholes in the Constitution, made another mockery of the same.

The ‘Doctrine of Public Rating’ could be the means to bring back the power to the people of India. I can only hope against hope that the good sense will finally prevail.