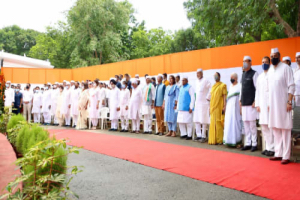 New Delhi: With the announcement of the schedule for the election of a new Congress Party president, speculations are rife in the Congress as well as in the political circles that whether the new party chief would be from the Gandhi family or from outside the family. As it is, the Congress Party today is in a bad shape and revival seems to be an uphill task. Anyone who takes the charge of the party needs to address the persisting doubts over the party’s capabilities to take on the Narendra Modi-led Bharatiya Janata Party in the 2024 Lok Sabha polls.

The Congress Working Committee (CWC), at its meeting on August 28, 2022, set up October 17 to be the polling day for the party chief, with the process for nominations beginning from September 24. The much-awaited process was announced, amid continuing claims that Rahul Gandhi was not ready to retake the reins of the party. Sources at the All India Congress Committee (AICC) said that the election would set the stage for the installation of the new leadership after three years of drift and confusion since Rahul Gandhi abruptly quit the top post in the wake of the party’s disastrous defeat in the 2019 Lok Sabha polls.

Seniors like Mallikarjun Kharge and Salman Khursheed have said that they would request and convince Rahul Gandhi to accept the leadership. “The basic problem is that the party is struck with the leadership issue”, said a senior leader who added that Rahul will neither lead nor follow and will instead teeter on the edge of indecision. The party seems grappling with the problem that while the old guards lack imagination, the new sets of leaders lack a political base.

Over the last three years, several Congress leaders quit the party, with the latest being Gulam Nabi Azad. The general perception among the political circles is that today the party lacks any coherent marketable ideal and is devoid of any core strategy; it lives day to day among the crumbling remains of a political empire. The old guard and the young are at loggerheads. It is said that the problem of the Congress Party has always been that it is occupied with its internal issues and has lost sight of what the external political environment needs today.

On the other side Sonia Gandhi, who is abroad for medical help, would be completing 77 years this December and may not be active to control and guide the party given her poor health. In these circumstances, party men ask that what if Rahul Gandhi refused to accept party presidentship? Will the party go for Priyanka Gandhi Vadra? Many feel that she may not be effective, as she was proven in Uttar Pradesh. For the last 10 days, newspapers, writing about Rajasthan Chief Minister Ashok Gehlot as a dark horse as party chief. The leader of the Opposition in Rajya Sabha, Mallikarjun Kharge could also emerge as a dark horse for the party chief position.

Interestingly, the CWC meeting did not make any call for Rahul to return as party chief. Sources said because Rahul had been insisting that he would not be interested in leading the party, many CWC members did not discuss his name. It would be interesting, if the Congress dissident group known as G-23, would enter the fray. Sources say that if Rahul does not agree to be the choice, there are speculations that Manish Tiwari, Shashi Tharoor or Prithviraj Chauhan could contest the polls.

Party sources maintain that Gulam Nabi Azad quitting the party and terming Rahul Gandhi as “non-serious…. immature” cast a shadow on the party presidential election in October. Against this backdrop, consensus choice for the party president may not be easy. It looks that fight seems to be inevitable for the president post. The last election for the party post was held in November 2000, when Sonia Gandhi took on fellow Congressman Jitendra Prasada. Sonia polled 7,542 votes, while Prasada got only 94 votes.

On one side, the party presidential election is a top priority, on the other side Rahul Gandhi is undertaking a Bharat Jodo Yatra of 3500 km from south to north and the party is planning a big launch event at Tamil Nadu’s Kanyakumari on September 7. Party men feel that the Yatra would be a big opportunity for the Congress Party to revive the party nationally. Along the route, Rahul would get ample opportunity to interact with the locals and connect with them. “The idea is to project an image of a common man”, said an AICC functionary.

The AICC feels that the Bharat Jodo Yatra would be a game changer and project Rahul Gandhi on a high pedestal. The Yatra will pass through 12 states and 2 union territories and is likely to criss-cross through Tamil Nadu, Kerala, Karnataka, Andhra Pradesh, Telangana, Maharashtra, Madhya Pradesh, Rajasthan, Uttar Pradesh, Haryana, Delhi, Punjab and Jammu and Kashmir. The party is in the process of finalising a dedicated website for the Yatra and will also launch a logo for the national event so that the people can associate with it, the AICC said.