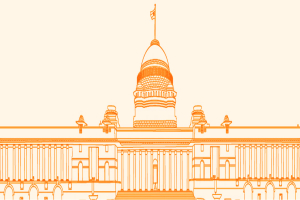 New Delhi: Droupadi Murmu will take on veteran Yashwant Sinha in the 16th Presidential election, to be held on July 18, this year.

Murmu, a 64-year-old tribal leader from Odisha, is the Presidential candidate of the ruling Bharatiya Janata Party. Her name was announced just a day after her birthday today evening by the BJP president JP Nadda here. She was the 9th governor of Jharkhand and the first to complete the five-year term as governor of the eastern state from 2015 to 2021. Earlier she was a member of the Odisha Legislative Assembly between 2000 and 2009 and was also a minister in the Chief Minister Navin Patnaik’s government in the state. Besides being the first woman governor of Jharkhand, she was also the first woman and tribal from Odisha to be appointed as governor of an Indian state.

The BJP held its Parliamentary Board meeting today where it had discussed the probable candidates for Presidency. Prime Minister Narendra Modi chaired the meeting with the top BJP leaders at the party headquarters here in Delhi. Party Chief JP Nadda, Defence Minister Rajnath Singh, Home Minister Amit Shaw, and Surface Transport Minister Nitin Gadkari were among those who attended the meet.

Earlier, the BJP also formed a 14-member team to oversee the presidential election. On Sunday, June 19, 2022, Nadda held a key meeting to brainstorm on the upcoming election where members of the management team were present including G Kishan Reddy, Gajendra Singh Shekhawat, Ashwini Vaishnav, Sambit Patra and others. Sources said that Nadda and his team reached out to various parties for a consensus but many of them had asked the National Democratic Alliance to spell out its choice first.

With this, the Opposition parties had a face-saving in putting up a strong candidate in the name of 84-year-old, Sinha, an ardent critic of Prime Minister Narendra Modi and his government’s policies who had quit the Bharatiya Janata Party on April 28, 2018.

The Opposition had been struggling to finalise a candidate as three senior probables had declined. It may be recalled that it was Trinamul Congress chief Mamata Bannerjee, who held a meeting of 20 opposition parties, on June  15, 2022, in Delhi, to work out a consensus candidate against the ruling BJP. In the process, three names emerged — Sharad Pawar of NCP, followed by Farooq Abdulla of National Conference and both rejected stating that they wanted to remain active in politics for some more time.

The third choice was that of Gopal Krishna Gandhi, grandson of Mahatma Gandhi and Chakraborty Rajagopalachari and a former Governor of West Bengal, who also at the last minute declined to accept the offer.

Though Mamata named Trinamul Congress party Vice President Yashwant Sinha as one of the candidates, there were no takers then.  However, the Opposition parties at its scheduled meeting today agreed for Sinha, who today resigned from the Trinamul Congress. Sources said that Sharad Pawar had wider consultations with the opposition parties before they zeroed in on Yashwant Sinha, who was initially seen as a BJP rebel. Among others, Pawar spoke to the Aam Aadmi Party supremo Arvind Kejriwal, Telugu Rashtra Samithi supremo K Chandrashekhar Rao, Samajwadi Party chief Akhilesh Yadav, Rashtriya Janata Dal leader Tejaswi Yadav. All these leaders are learnt to have been positive about Sinha’s name.

In fact, the buzz around Sinha’s possible candidature started this morning after he tweeted indicating his resignation from TMC to work for ‘’greater opposition unity”. As finance minister, Sinha had served in the Vajpayee-led cabinet at a time when the NDA government had Mamata Bannerjee as the Railway Minister. He left the BJP in 2018 and joined Mamata’s Trinamul Congress in March 2021. Sources said that the Opposition finally come to the conclusion that the candidate should be non-partisan and an intellectual. Left leaders while agreeing to Yashwant Sinha’s name, wanted him to resign from all party posts of Trinamul Congress and contest as an independent.

An upper-caste Kayastha from Jharkhand, Sinha had a chequered career. He joined active politics as a member of the Janata Party after resigning from Indian Administrative Service in 1984 and got into Rajya Sabha in 1988. When the Janata Dal was in power in 1989, Sinha was appointed as its general secretary. He later joined the BJP and held several portfolios including Finance and External Affairs in the Atal Behari Vajpayee government.

In the final analysis, the Opposition senses an opportunity for at least a symbolic push, as the NDA does not have the numbers for a sure-shot victory. The NDA as of today is said to be short of around 13,000 votes in the total electoral college of 10,86,421. Sources say that the YSR-CP government led by Jagan Mohan Reddy in Andhra Pradesh and Naveen Patnaik government in Odisha are expected to back the BJP candidate, as they did during the 2017 presidential election also.

The last date for filing nomination papers for the Presidential polls is June 29, 2022.