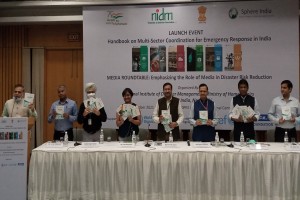 The handbooks on six key thematic sectors of emergency response- Health, Shelter, Education, Food and Nutrition, Water & Sanitation and Protection – act as an operational manual for stakeholder coordination during emergencies and have been compiled through comprehensive research with a number of prestigious agencies working in the field of disaster risk reduction.

While delivering his keynote address,major General  Bindal spoke of the critical role of a flexible and participatory coordination mechanism for efficient disaster risk mitigation and management during a crisis.

“COVID-19 in particular has brought everyone together for the first time in history in the disaster response. It has proven that today the need of the day is to work together, collaborate together and to have participatory approach and work towards the common goal by helping each other both in thoughts and action and in material. In this context, these handbooks will be essential to improve coordination between all stakeholders- including central and state and local governments, INGOs, CSOs, NGOs, and the affected communities,” he said.

The Workshop was organised by NIDM in collaboration with Sphere India –  a National Coalition of 93 humanitarian organisations.

Professor Anil Kumar Gupta, Head ECDRM [Environment, Climate and Disaster Risk Management], NIDM, mentioned that the efforts for developing these handbooks started before the pandemic and are a culmination of almost two years of efforts by Sphere India and NIDM with over 20 consultative meetings and COVID-19 Academy webinars while developing them. “The handbooks have linkages with the Prime Minister’s 10 point agenda on DRR, especially point 8 as this initiative is geared towards developing local capacities”.

Professor Santosh Kumar of NIDM stressed on community engagement at the inception of any program, especially in DRR to ensure that the needs of the community are met and its risks and vulnerabilities are mitigated.

Lee Macqueen, Senior Program Manager, National Campaign on Dalit Human Rights (NCDHR) and Vice Chair Sphere India and Lead Protection Committee briefly explained all aspects of the Handbook with practical guidance and advice on how different stakeholders and sector actors like NGOs, CSOs, Government at all levels, UN agencies, and Media can come together and strategise a collective response and preparedness during emergencies, prior to emergencies and post emergencies which are based on key humanitarian principles on needs, without discrimination. “It provides uniform guidance, advice, what could be the approach to strengthen our preparedness and guidelines for contingency planning at National, State and local level,” Lee said.

Dr. Rajat Jain, President, Doctors for You, Co-Lead Health Committee, said for disaster like situation proper coordinated effort must required. We need the organizations which can create a balance between the government institutes, civil societies and CSR partners so that all the efforts bare channelised to a particular place with common aim which is the benefit of the society.

“There must be someone in mobilising the resources material and man power both. He emphasised on the importance of 8th point of the PM 10 Point agenda i.e local capacity development. The biggest challenge in medical crisis is proper training,” Dr. Jain said.

Later, during a round-table on the topic, ‘Emphasising the Role of Media in Disaster Risk Reduction’, Global Bihari‘s Chief Editor Deepak Parvatiyar, who is also Media Advisor of the Indian Federation of United Nations Associations, New Delhi, and a member of World Water Council, said in the absence of proper coordination between the authorities and journalists, the gap between authentic and unverified news gives rise to speculative journalism and sensationalism. Illustrating his field experience during the Mumbai serial bomb blasts of 1993, Surat Plague of 1994, Kandla Cyclone as well as Kutch earthquake of 2001, he said all these major disasters saw communication breakdown in the initial stages which institutes such as NIDM need to pay attention to. He also mentioned that since water is at the root of a majority disasters – whether cyclones, floods, landslides, tsunami, drought and so on, it was high time to consider imparting water literacy to water communities for better management of water resources and prompt mitigative measures. Parvatiyar said with technology such as better synergy between ham operators, government officials and journalists, it was possible to disseminate correct information during the initial critical hours of any disaster.

Also read: High time to focus on the role of media in disaster risk reduction

Roshan Gaur, Bureau Chief of Rashtriya Sahara, raised the issue of unplanned development of the Himalayan belt, which he said was possible because of the collusion between corrupt government officials, builders and mining mafia. This, Gaur said, was inviting disaster and despite many media reports exposing such unholy nexus, there was little progress to check such activities in the Himalayan states.

Moderating the round-table discussions, senior journalist Onkareshwar Pandey, raised direct questions before the authorities such as NIDM on the bottlenecks that they face in providing correct picture to journalists whenever a disaster strikes?