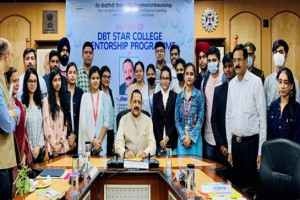 Dr. Singh informed that this has been a pan India Scheme that envisages Star College in every district of the country supported by the Department of Biotechnology. A total of 278 undergraduate colleges across the country are currently being supported under the DBT Star College Scheme, he said, adding that the categorization of the scheme into urban and rural categories during 2018-19 ensured a level playing field for applicants hailing from rural and urban areas of the country. He noted that presently 55 colleges from rural areas and 15 colleges in “aspirational” districts are being supported under the scheme in a short time period of two years.

The Minister said that the DBT-Star College Mentorship Programme will help towards the concept of networking, hand holding and outreach. The plan envisages organizing workshops, meetings per month; handhold at colleges particularly in the rural areas or lesser endowed areas and conduct outreach activities with government schools. He said, the activities will enable newer colleges which have begun their journey under the scheme to come up as per the mandate of Star college scheme. The Star Status Colleges will help in incorporating the vision of DBT towards strengthening of UG Science Courses throughout the country by mentoring the newer colleges through hand-holding and peer learning and bringing them under the aegis of Star College Scheme, the Minister added.