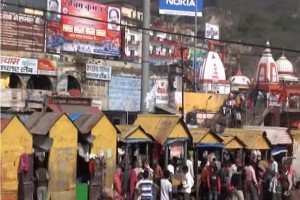 The world’s largest gathering of Maha-Kumbh has started on the occasion of Makar Sankranti on banks of the Ganga at Haridwar. However, this time due to an impact of the pandemic, it can not be as usual. In fact this is a gathering of all sects and traditions from India and abroad. Here, the issue of Gurdwara Gyan Godri Sahib has been in discussion for a long time. This shrine is associated with the pilgrimage of Guru Nanak Dev in 1504-05, when he visited Haridwar.

In the first twenty-four years of the sixteenth century Guru Nanak had travelled extensively in five phases. As such he is referred to as the second longest distance traveler in the world history. His itineraries are recorded as udasi due to prolonged stay away from the home. The preaching of righteousness against the prevailing hypocrisy is also present in that series of pilgrimages. On account of that the followers of Sikhism came to know about a number of holy places. Humanity, including Hinduism, are equally rewarded.

After the long hearing in the Ram Mandir case the Supreme Court verdict came on November 9, 2019. In the addenda of this verdict the court mentioned about the second pilgrimage of Guru Nanak in 1510-11. In order to refer to the birth place of Lord Rama his name has been repeated at least fourteen times between page number 62 and 65. The mention of at least five centuries older pilgrimage by the founder of Sikhism in the SC verdict is a mark of unity and fraternity.

Gyan Godri Sahib Gurudwara has been associated with the first udasi. In fact before having a dip in the Saryu at Ayodhya, he took the dip in the Ganga at Haridwar. The shrine used to be located near Har-ki-Pauri, most crowded place of the temple-town, before forty-two years as a symbol of his stay. The divisional commissioner of Saharanpur sought it for development and beautification in 1978. Since then onwards Sikhs have been evicted from there. There is no way to continue the rituals and services to the pilgrims. The efforts to wash this stain has also been going on for a long time. Success of Ram Mandir Movement has strengthened dwindling prospects for the Khalsa Panth.

The development and beautification of Gyan Godri Sahib is a unique case of generosity adopted by the state. Precise details of its establishment is not available in public domain despite being associated with the founding father of Sikhism. Still there is no doubt about its presence for several decades in the pervious centuries. The writings of pilgrims are also helpful in this regard. Referring to the bicycle tour of 1930, Bhai Dhanna Singh from Patiala wrote how the three-room-shrine had been engaged in serving the pilgrims while facing difficulties. In the process of developing Har-ki-Pauri area, the state evacuated it with a promise to return it by the end of seventies. Six years later, the then Prime Minister Indira Gandhi was assassinated that was the cause of charged atmosphere against their community. As a result, the stand of government also changed. This is evident from the state policy adopted after accomplishment of the development project. The district administration handed over this heritage site of Sikhism to the Scouts and Guides that created a deep chasm. This perceived injustice seemed to be an effort to incite his followers. This plight of the shrine can prove to be the cause of disharmony between Sikhs and Hindus. This injustice has compelled the Sikhs to organise against the Uttar Pradesh government for a decade and a half. Uttarakhand government has also been a witness to a series of protests in the last couple of decades. The political parties are also involved in this case with their own interests.

The excitement of the success saga in Ram Mandir movement is out of control in certain parts of India. The group of Hindus are already chanting the slogans of Kashi and Mathura. This is the call of the time to consider the mention of Nanak’s Ayodhya visit to Ayodhya in the SC verdict. This can be helpful to further cement the relations between the two different sects. A number of historical references categorically mentioned the dialogue on the bank of the Ganga between Nanak and priestly community. The proponents of different faiths live in peace and harmony in the Indian society. Gyan Godri Sahib is the symbol of Guru Nanak’s staying at Haridwar. As such this is a question of the identity of the Sikhs. After considering its pros and cons, Sardar Jagjeet Singh has moved towards the court. This issue should have been resolved by now. Indeed it will be better to settle this issue through peaceful negotiations at the earliest.

*The writer is a social activist and author of The Holy Ganga (Rupa, 2008), Managing Editor of Panchayat Sandesh, and his column Across The Lines appears in the vernacular publications.