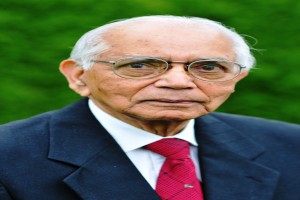 New Delhi: Padma Vibhushan Professor Calyampudi Radhakrishna Rao, the living legend of statistics, was felicitated on the occasion of his 100th birthday at an online symposium held on September 9.

The felicitation was conferred by the Department of Science and Technology (DST), Government of India, for Professor Rao’s “path-breaking contributions in the field of statistics, for recognising and facilitating the critical role of data and computing to handle scientific and social challenges, for mentoring inspiring and nurturing generations of students and researchers and for developing world-class statistical infrastructure in India”.

The doyen of statistics whose work has influenced not just statistics, but has had far-reaching implications for fields as varied as economics, genetics, anthropology, geology, national planning, demography, biometry, and medicine, continues to contribute to his field as actively today.

“Prof C. R. Rao’s contribution in the data field is enormous, and it has immensely benefited the Country. Some of Prof. C.R. Rao’s work has had deep impacts on genetics, and that has great influence on the work we do now. It is amazing to see the breadth of work Prof. C.R. Rao has taken on,” said Principal Scientific Advisor Professor K. Vijay Raghavan, one of the distinguished guests at the felicitation ceremony. He also added that the C.R. Rao Advanced Institute of Mathematics, Statistics, and Computer Science set up by him has truly transformed the data collection and analysis in India in every area.

“Data is the new water, and the future is going to revolve around it. Industry 4.0 and beyond is all about creating data, analysing data, building on data and making great discoveries with it.Padma Vibhushan Prof C R Rao was working on the science of data 70 years ago and was much ahead of his times. He is not only a scientist but also an institution builder. The country and the world will always be indebted to Prof Rao for his pioneering contributions to the field of statistics”, said DST Secretary Professor Ashutosh Sharma while felicitating Professor Rao.

While Professor Shekhar C. Mande, Director General Council for Scientific and Industrial Research (CSIR), conveyed his warm greetings to Prof. C.R. Rao for his 100th birthday on behalf of the entire CSIR family, Professor Bimal Roy, Chairman National Statistical Commission, recalled Prof. Rao’s understanding of statistics as a subject not limited to studying the subject to solve problems in the same subject but to solve problems in other disciplines.