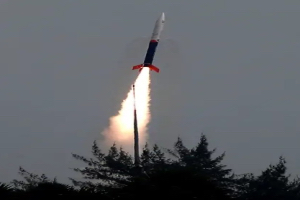 Sriharikota: The Indian Space Research Organisation (ISRO) made history today by successfully launching India’s maiden private Vikram-suborbital (VKS) rocket to grace the skies. The launcher reached an altitude of about 89.5 km in 155 seconds, as planned.

The launch of the suborbital launch vehicle from Skyroot Aerospace Pvt. Ltd., Hyderabad, was accomplished successfully at 11:30 am IST from the sounding rocket launch complex at Satish Dhawan Space Centre, Sriharikota.  The mission was authorized by Indian National Space Promotion and Authorization Center (IN-SPACe). The sounding rocket carried three payloads including one from foreign customers.

Vikram-S is a single-stage fuel rocket meant to test most systems and processes in Skyroot Aerospace’s project ahead of the launch of Vikram-1 next year. The rocket goes to the max altitude of 81.5 kilometres and splashes into the sea and the overall duration of the launch is about 300 seconds only.

Union Minister of State for Space, Dr Jitendra Singh, who was present at the launching site, said that Skyroot was the first StartUp to sign an MoU with ISRO for launching its rockets. He said, apart from being the nation’s first private launch, it is also the maiden mission of Skyroot Aerospace, named “Prarambh”.

Dr Singh and Chairman of IN-SPACe, Dr Pawan Goenka,  congratulated Skyroot for the accomplishment and thanked ISRO for the able support provided.

Prime Minister Narendra Modi congratulated ISRO and IN-SPACe for the successful launch of India’s maiden private rocket Vikram-Suborbital developed by Skyroot Aerospace. In a series of tweets, the Prime Minister said: “A historic moment for India as the rocket Vikram-S, developed by Skyroot Aerospace, took off from Sriharikota today! It is an important milestone in the journey of India’s private space industry. Congrats to @isro & @INSPACeIND for enabling this feat. This accomplishment bears testimony to the immense talent of our youth, who took full advantage of the landmark space sector reforms of June 2020.”