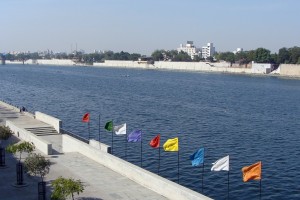 The Sabarmati River Front in Ahmedabad

Ahmedabad: The near total rout of the Congress in the six municipal corporation elections of Gujarat should not have surprised anybody. That the Grand Old Party of India would lose this round of polls too, as it did for last 25 years in Gujarat, was known to even political novice.

But, more than losing the municipal polls, the Congress has actually lost its status as the main Opposition party — at least in the diamond city of Surat in south Gujarat. Delhi-based Aam Aadmi Party (AAP) has seized the status of Congress even as the opposition party in Surat.

Patel disenchantment with the Bharatiya Janata Party (BJP) during the last few years since their agitation for reservation has not accrued any benefit to the Congress. Instead, the AAP has won a majority of the wards in the Patel dominated areas, a clear rejection of Hardik Patel who started and led the quota stir.

Clearly, it is the Patels’ disapproval of their leader Hardik joining the Congress but not agreeing to vote for the BJP once again.

While continuation of ‘(Prime Minister Narendra) Modi magic’ and start of Ram Mandir construction can easily be attributed to the BJP’s landslide victory in the six corporation polls, the Congress has proved itself of being out of touch with the people for quite few years now. The BJP won all six municipal corporations in the state – Ahmedabad, Bhavnagar, Jamnagar, Rajkot, Surat and Vadodara, winning in the process 483 out of 576 seats.

That the Congress has lost live contact with the people is evident from its launching of a cell phone helpline seeking urban Gujarat’s suggestions and complaints to be included in the manifesto.

The helpline “Hello Gujarat” was launched in January this year simply because the Congress had run out of ideas in 25 years of staying away from power. Not only that, the Congress has also probably lost its sense to judge which ideas would be suitable to implement in a conservative society like Gujarat.

Otherwise, how can one explain the promise of opening cafes suitable as ‘dating destinations’ in Vadodara and, thus, giving the BJP a golden chance to condemn the idea as ‘Italian culture’. Incidentally, the promise of ‘dating café’ was announced on the eve of Valentine’s Day, an age-old punching bag of the Sangh Parivar affiliates.

This is not the first time that the Gujarat Congress has indicated clearly that it has lost touch with the state’s people. In the run-up to the 2017 assembly elections, the Congress had approached various voluntary agencies and civil society activists to know about the problems of the rural people.

No wonder, the party is showing signs of getting erased from the people’s mind.