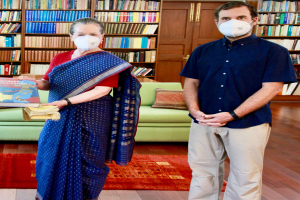 New Delhi: Even as the Congress president Sonia Gandhi and Member of Parliament Rahul Gandhi have been served notices by the Enforcement Directorate (ED), to appear before it for questioning on separate dates, in the National Herald takeover case, there is intense speculation in political circles about the dramatic move.

With the Gandhi family coming under the scanner, the angered Congress party rubbished the charges. Congress alleged that it is a political vendetta and that the Narendra Modi government is misusing the central agencies. The ruling Bharatiya Janata Party on its part, hit back strongly, stating that the law is taking its own course.

This money laundering case registered against Young Indian, which owns Associated Journals Limited (AJL) and its properties, is worth over Rs 800 crore (market value as estimated by ED). Sonia and her two children —-Rahul and Priyanka— are majority shareholders in Young Indian, which was incorporated by them along with Suman Dubey and Sam Pitroda in November 2010.

Sources said that these developments marked a crucial phase in the investigation into the allegations of Gandhi’s turning AJL— which use to bring out the National Herald and other publications— into their family entity in violation of Income Tax laws and by using money laundered through shell companies.

Describing the ED summons as “ fake “ and only to divert the attention, the Congress Party made it clear that Sonia and Rahul would comply with the summons and defeat the conspiracy. Reacting to the Congress , the BJP chief J P Nadda said that there are valid documents to prove the charges of irregularities against the Gandhis. He suggested the Gandhis to approach the court and get the charges quashed if they are not guilty.

The Congress legal cell continues to argue by saying that “it is a weird case of laundering in which no money is involved”. The party said that the company AJL had commercial problems and the Congress  Party gave it a loan of Rs. 90 crore as financial support. Congress said “ AJL did what every company in India and abroad does, it converted its debt into equity. This debt of Rs. 90 crores was assigned to a new company “ Young Indian” so that the books of AJL became debt-free. Young Indian was created under a special provision of the Companies Act’s section 25, which has two vital conditions. It is a not-for-profit company and no dividends can be given to its shareholders and directors. “There is no transfer of any asset. So, where is the money laundering?” the Congress Party questioned?

Congress spokesman Abhishek Singhvi maintained that the ED had closed the case in 2015, but the government changed the agency head and got a new opinion to reopen the case, and now issued summons after seven years. ‘’The British rule had attacked and banned the Herald newspaper, which was on the forefront of the freedom struggle, and Modi is only imitating the colonial power because he too is frightened after his all-round failure,” Singhvi said.

Though final dates for questioning are yet to be fixed, with Sonia Gandhi down with Corona and Rahul presently abroad, the ED will record the statements on the alleged money trail mapped by the Agency and the Income Tax Department, especially how they “ took over “ commercial properties worth Rs 800 crores through Young Indian, which had a share capital of just Rs 5 lakh, sources said.

Sources say that this case relates to Young Indian taking over 99% shareholding of AJL and all its properties across major cities in India within three months of being incorporated. The ED’s investigation is based on an Income Tax case and subsequent order of the Delhi HC validating the charges of the Income Tax department against the Gandhis and their family friends. It is learnt, that the Income Tax department had claimed that Young Indian had taken “Hawala entry of Rs 1 crore from a shell company of Kolkata. Besides these charges, the ED is also probing how the entire — process of the takeover of the commercial property of AJL was completed within three months from the date of incorporation of Young India without paying any taxes and stamp duty.

The National Herald paper, published by the AJL, which was at the forefront during the freedom struggle, had almost become defunct by 2008 when its owners, Congress Party, decided to stop printing. Ever since, they started exploring commercial options by renting out AJL’s properties situated at prime locations in Delhi, Lucknow, Mumbai, Chandigarh and Patna. These properties were acquired over the years with the help of Congress Governments in the States. Then a new entity, Young Indian, was incorporated in November 2010, during the UPA-II regime by the Gandhis. It had only Rs 5 lakh in share capital when it came into being.

Going by the ED’s preliminary probe, the company controlled by Gandhis, which started off with just Rs 5 lakh, now owns properties worth Rs 800 crores across the country.