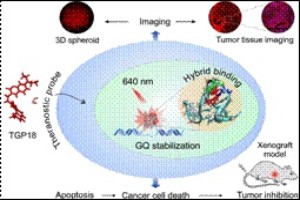 Bengaluru: Lung cancer, the most common cause of cancer-related death worldwide, is tough to detect at early stages, making it difficult to treat. Scientists may soon have a solution in the form of diagnostic therapy for lung cancer which paves the way for personalized medicine.

The selective recognition and imaging of oncogene specific non-canonical DNA secondary structures (G-quadruplex-GQ structures) holds great promise in the development of diagnostic therapy (theranostics) for cancer and has been challenging due to their structural dynamics and diversity.

Prof. T. Govindaraju, along with his team from JNCASR, developed a small molecule for selective recognition of BCL-2 GQ through unique hybrid loop stacking and groove binding mode with turn on far-red fluorescence response and anticancer activity demonstrating the potential as GQ-targeted lung cancer theranostics.

The JNCASR team reported the theranostic activity of TGP18 molecule by turn on fluorescence recognition of BCL-2 GQ through unique hybrid binding mode as well as its anti-lung cancer activity and tissue imaging potential. Their strategy of specific topology recognition through hybrid binding mode led to capitalize on the gains of oxidative stress and genome instability to kill lung cancer cells in vivo. In addition, TGP18 with turn on emission band at the lower edge of far-red to NIR spectroscopic window proved to be a viable probe for tumour tissue imaging. Collectively, theranostic agent TGP18 with outstanding biocompatibility showed in vivo tumor inhibition and tissue imaging, indicating excellent clinical translational potential.

G-quadruplexes (GQs) are non-canonical DNA secondary structures which regulate a wide range of cellular processes, including expression of several oncogenes. In cancer cells, stabilization of GQs leads to replication stress and DNA damage accumulation and therefore considered as promising chemotherapeutic target. Despite the significant attempts to combine therapeutic and diagnostic properties in a single formulation, there are no concerted reports on small molecule theranostics. Similarly, there are no molecules reported for the topology selective recognition of myriad of GQs, especially oncogenic GQs.

This study by the JNCASR team revealed that the selective recognition originating from the distinct loop structure of GQ that alters the overall probe interaction and binding affinity. TGP18 binding to anti-apoptotic BCL-2 GQ ablates the pro-survival function and elicit anti-cancer activity by inducing death in cancer cells. The JNCASR team deciphered that inhibition of BCL-2 transcription synergized with signalling cascade of nucleolar stress, DNA damage, and oxidative stress in triggering apoptosis signalling pathway. Intervention of GQ mediated lethality by TGP18 translated into anti-cancer activity in both in vitro 3D spheroid culture and in vivo xenograft models of lung and breast cancer with superior efficacy for the former. In vivo therapeutic efficacy, supplemented with tumor 3D spheroid and tissue imaging potential define the role of TGP18 in GQ-targeted cancer theranostics.

According to their findings, a remarkably lower dosage of TGP18 (0.5 mg/kg) showed anti-lung tumor activity similar to anticancer drug gemcitabine at a very high dose of 100 mg/kg. The therapeutic agent TGP18 was found to reach the target tumor site as monitored by its far-red imaging of the tumor tissue.

This methodology can be further exploited to develop cancer-type specific theranostic drugs with tremendous implications in personalized medicine. A patent application has been already filed for this invention.