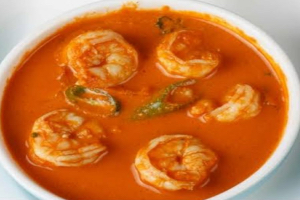 The coastal State of Goa is a popular tourist destination known for the sun, sand, beach and good food. Hindus, Muslims and Christians are the three major communities of Goa that contribute to its culinary culture. The Goan food indeed is a contrasting influence of its rich history and legacy that is mainly inspired by Indian and Portuguese influences with an exciting blend of the East and the west. Let’s look into the Goan cuisine to know about the fun-loving land.

Prawns Xeque Xeque ( pronounced as shek shek) is an exotic Goan prawn curry with unique flavours and mild spices. The hearty seafood stew is made with fresh prawns combined with coconut and a handful of other flavourful ingredients.  The prawn curry is usually accompanied with dosas, sanas or fugias.

Salt as per taste

For the masala paste

Clean and devein the prawns and salt and keep it aside.

Heat a tsp of oil in a pan and roast the cumin seed, coriander seed, peppercorn, clove, cinnamon, and red chilli on low flame till fragrant. Transfer to a plate.

In the same pan add the grated coconut and roast on medium flame until it changes its colour.

Grind the roasted spices along with coconut, turmeric powder and tamarind paste into a fine paste.

Heat the remaining oil in a thick bottom vessel and saute the onion till translucent. Next, add the tomatoes and cook until soft. To this add the ginger garlic paste and saute them all together.

Once the masala is done, add the ground masala along with a cup of water and let it come to a boil.

Gradually add the prawns and give it a stir. Add salt and cover and cook for about five to seven minutes on medium flame.

Serve it hot along with sannas, dosas or fugias.