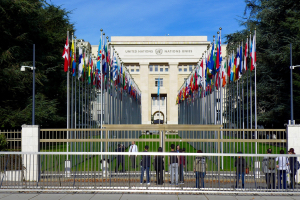 New Delhi: The Union Cabinet today approved the proposal for the signing of an agreement between the Government of India and the United Nations on a ‘Way Finding Application’ to be used in the Palais des Nations – the United Nations Office at Geneva (UNOG).

The project has been conceptualized as a donation from the Government of India to the UN on the occasion of its 75th anniversary in 2020.  The estimated financial implication for the development deployment and maintenance of the App is $ 2 million.

“The App will make India’s presence felt in the UN and showcase its soft power in the form of strong software technology expertise – a ‘Made in India’ App in the mobiles of who come from across the globe,” a Cabinet release said.

The UNOG, consisting of five buildings and 21 floors, is housed at the historic Palais des Nations.  Keeping in view the complexity of buildings and huge participation, there was a requirement for a navigational application which can help the visitors and other delegates in finding their way inside the premises while adhering to all security perspectives.

While the Global Positioning System (GPS) based Apps function in open space, a more precise in-building navigational App will assist the visitors in locating the room and offices. A large number of delegates, members of civil society and the general public visit UNOG to participate in various meetings and conventions.

The project consists of the development deployment and maintenance of a software-based ‘Way Finding Application’ to facilitate navigation in the Palais des Nations premises of UNLG.  The application will enable users to find their way from point to point within the 21 floors spread across five buildings of UNOG.  The App will work on Android and iOS devices with an internet connection.  The development of the App has been entrusted to the Centre for Development of Telematics (C-DoT), an autonomous telecom Research & Development Centre of the Department of Telecommunications (DoT), Government of India.

The United Nations (UN) is an international organization founded in 1945.  It is currently made up of 193 Member States.  India is a founding member of the United Nations.