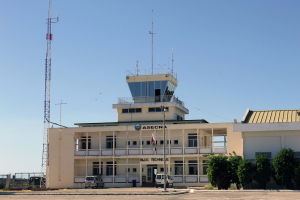 Antananarivo: India and Madagascar are talking about starting direct flights between the two countries. In this regard, Indian Ambassador Abhay Kumar met M Rolland Ranjatoelina, Minister of Transport and Meteorology of Madagascar today.

They discussed the possibility of starting direct flights between Mumbai and Antananarivo.

Madagascar is a biodiversity hotspot and has plants and animals which are not found elsewhere in the world.

Madagascar, which is located just 6 hours away in the Indian Ocean next to Mauritius, remains unexplored by Indian tourists. Visa is available for Indian tourists on arrival in Madagascar and there are many places to visit across the country from Baobab Alley to dancing lemurs to singing whales and pristine beaches. Madagascar is a traveller’s dream. It has the best dark night skies for Astro-tourism. All the major constellations visible from the Southern Hemisphere are visible in Madagascar.

A direct flight between India and Madagascar can help the people of Madagascar to avail world-class health, educational and financial services in India and can promote tourism between the two countries.

“Thank you President @SE_Rajoelina. The challenges faced by Island States due to climate change are a key focus of our efforts under the CDRI initiative to create resilient infrastructure,” Modi tweeted.