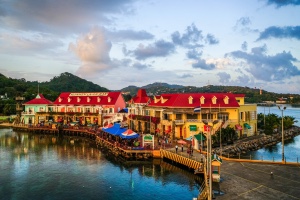 The World Around Us

The left-leaning Xiomara Castro’s poll fortunes in the recently held Central American country of Honduras is being keenly watched by both super powers, namely the US and China.

Honduras, one of the poorest nations in Central America, is currently in the eye of a storm owing to the fact that any change in its leadership might result in its de-recognising Taiwan. Incidentally, it happens to be one of the 15 countries from across the globe that recognises the legitimacy of an independent Taiwan.

The country that has witnessed a spate of political murders owing to the aspiring opposition left Party’s drive to support a Communist China in exchange for investments flooding the country is now sitting on a pot boiler.

Interestingly, Xiomara, who has been vociferous in her support to China has turned silent after a recent US top aide visited Honduras.

Chinese authorities on their part were reportedly hawkish about a team of high-level US delegates visiting Taiwan.

The battle for the presidential polls in Honduras centres around a public outcry against its current head of state, Juan Orlando Hernandez, whose eight year uninterrupted stint in office bears testimony to a host of corruption charges besides his brother getting sentenced for drug trafficking by a New York court. However, the hopes of many are mired in anxiety, recalling Juan’s triumph in the 2017 elections being orchestrated by a constitutional amendment.

Incidents of post-electoral violence and frauds that clouded the 2017 electoral race continues to haunt the Honduras electorate with many hoping for a change in guard that might mitigate the situation on ground and also rein in the spate of forced migrations to the neighbouring United States. Many of them have fled to the US without any proper documents just to find a comfortable means of survival or eking out a livelihood.

The opposition in Honduras is being led by the former first lady, Xiomora Castro, who has currently poised herself as an anti-corruption crusader. Many here in Honduras recall her husband unceremoniously being ousted from power way back in 2008 after being faced with bribery allegations. The old timers are of the opinion, “We have to pick the lesser of the two evils.”

The opposition leaders rallying round Ximora are painting her as a left-leaning politician who can pitch for equitable development. The race between the two presidential candidates looked to be a close one at the time of going to press. Citizens also voiced their concern that Juan is capable of using unfair means to continue staying in power.

The continuing state of disorder in the country has been accentuated by two hurricanes and the uncontrolled spread of the Covid19 pandemic. In addition, the young people complain about lack of job opportunities and a worrying law and order situation in the country. It was reported that robberies and muggings were rife in the countryside. The deteriorating crime scene and people forced to combat near starvation situations has made the electoral battle put people in deep anxiety over the awaited poll outcome.

Widespread corruption at the upper echelons of power besides the natural calamities that add to the sting of the pandemic has in recent years resulted in a mass exodus from the country to the United States. “Unlike in the instance of the Biblical Exodus that had Moses and Aaron to guide the people, this one is somewhat like a refugee crisis getting precipitated in our neighbouring country,” observed an old-timer.

To make things worse, people who were forced to leave their homes to survive the devastating floods caused by the hurricanes were left with nowhere to return as most of their homes were reduced to shambles. As people wait for the picture to get clear on the poll scene, it’s all fingers crossed in the country.