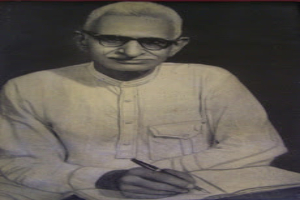 Shri Dilkhush Diwanji is an M.A. of the Bombay University, and might have been a professor in a college if he had chosen an academic career. But he elected to settle down in a village and share the hard lot of the villager. He chose Karadi, the little village where Gandhiji was arrested at the end of the Dandi march, for his field of activities and is conducting a khadi depot there which I purposely visited on my way back from Surat. The work that he is carrying on, the atmosphere he has created, the smiling faces not only of the children who surround him but also of the old women who flock to the depot – all this was a feast for the eyes.

For he has made himself one of them. He lives in a place humbler than theirs, he eats what they eat, cooking for himself, and lives and dresses himself like them.

Also read: History Recalled: “Gandhi appears to me as a soul rather than a man”

A group of old women – some of them very old who could hardly see my face clearly – had gathered in the depot from a neighbouring village. Their ages must be anything between 50 and 80. Each one had a little bundle of yarn with her which she had come to deliver at the depot. Each had a little pass-book in which every little detail of her yarn was shown – the weight, the count, the quality, the wage, etc., wastage, the yarn deducted for her own khadi, and the date. Everyone referred to Shri Diwanji as ‘son’, and the one with whom we began to talk addressed me also as ‘son’.

This ‘son’ Diwanji had descended as a ‘god’ among them, as they had no work, they had been put on the shelves, now they had work and they earned two to three annas per day. They were proud of their income wherewith they could make small purchases, including tea, which they confessed was bad but which nevertheless had become a need!

Everything in the depot was spick and span – the books, the boxes containing yarn according to their quality, and the khadi, the sacks of cleaned and uncleaned cotton, and the stocks of yarn. There was a method and orderliness about everything. When the work was started in 1936 there were only 12 wheels, and the wages given amounted Rs. 277-3-0. In 1937 there were 42 wheels, and the work has since increased leaps and bounds.

The boys in the Local Board school at Matwad have their spinning hour with Shri Diwanji. There is half an hour’s silent spinning and half an hour’s talk on the topics of the day. They asked me intelligent questions. They are all free from drink and the ‘petty vices’ of smoking, tea-drinking, etc. There is an intelligent appreciation among the village folk of the work that is going on, and I
should not be surprised if the boys who are coming under Shri Diwanji’s influence were to develop into workers in the cause of the uplift of their community.

2 thoughts on “History Recalled: A feast for the eyes”